The way things were

In February 1974, Buzz featured Mary Whitehouse on the cover. In the interview, Mrs Whitehouse expressed her belief that God had called her to the ‘international movement against moral pollution’.

How should Christians react to the ‘repulsive spectacle’ that was The Exorcist, Buzz wondered (April 1974). The article argued the film ‘presents the “supernatural” in a harrowing way that totally ignores the positive side of the picture’. Although Buzz said some Christians were taking ‘positive action’ and distributing tracts outside cinemas, the verdict on the film’s overall impact was that the ‘moral barometer’ of the UK was sinking ‘lower and lower’.

‘Catholic doctrine began to change and many Catholics experienced the Holy Spirit.’ This was the message of ‘When in Rome’ – an article which appeared in the first Buzz of 1975. ‘There are clear and unmistakable signs of the new birth, and also of a deep and powerful spiritual renewal’, the article read.

‘Are we at last waking up to the full potential of this amazing piece of modern technology?’ asked Buzz in March 1975. A headline that truly sums up the 1970s!

In January 1977, Buzz looked at the topic of television. Dr Paul Borgman called for Christians to think more about their attitudes toward T.V. He said 75% of television shows are ‘not very good’, but pointed out the same could be said of books.

‘Startling’, ‘refreshing’, ‘out of this world’, ‘a unique opportunity to share the good news’. All of these phrases were used in January 1978 to describe the first Star Wars film. In a piece entitled ‘Luke’s Gospel’, Lindsay Tuffin wrote that Ben Kenobi ‘can be paralleled to the Lord Jesus’ and wrote with much excitement that ‘already George Lucas is plotting the re-emergence of arch villain Darth Vader in a Star Wars sequel’. Thirty-eight years on, fans are looking forward to the seventh Star Wars film, which will be released at the end of this year.

In January 1982, Buzz reported that Britain’s very survival was being threatened by racial hatred. Lord Scarman had warned that the race riots of 1981 showed that ‘urgent action’ needed to be taken to stop racial discrimination becoming an ‘ineradicable disease’.

Billy Graham’s many crusades were often covered in the magazine. The July 1984 edition reported, ‘Eight days of almost constant rain did not stop a total of nearly a quarter of a million people attending Bristol’s Ashton Gate football stadium to hear Billy Graham preach.’ Over 20,000 responded to the evangelist’s famous call to ‘get up out of your seats’.

Margaret Thatcher ‘took time of [sic] from the dipping pound and the miners’ strike to attend Prom Praise’, Buzz reported in March 1985. The Prime Minister was pictured with Brian Phillips, managing director of Buzz, in the news pages.

After the Chernobyl disaster Buzz wondered if the apocalypse was upon us. ‘Chernobyl, AIDS and family: Are the horsemen in the saddle?’ asked the cover of the mag in January 1987. Inside, Dr Clifford Hill told Buzz that there would be economic collapse, political uncertainty, ‘trials on a scale unknown before in this nation’ and ‘even nuclear war unless the nations turn from the path they are taking now and turn back to God’.

The January 1988 edition of 21st Century Christian praised Adrian Plass for his ‘run away Christian best-seller’ The Sacred Diary. Richard Wright wrote that the book ‘brilliantly exposed some of the absurdities of the 80s church’.

‘Swaggart in shock resignation’ (April 1988) read the headline of a story that reported how the televangelist Jimmy Swaggart had resigned from his church in Louisiana following accusations that he had visited a prostitute.

21st Century Christian’s editor Hilary Saunders asked, ‘How can the Church provide a truly Christian response to those who are sick and dying?’ (April 1988). While she concluded that the Church had ‘failed’ to speak up for ‘God’s standards in society’, she
welcomed Spring Harvest’s decision to issue a compilation album of songs from the event with the proceeds going towards providing ‘help and care’ for AIDS sufferers.

Aladdin is part of a wider trend which promotes ‘the amoral and bizarre to children’, wrote Dave Roberts in February 1994. He found the Disney film to be ‘full of stereotypes…It is riddled with racism, sexism, voyeurism and polite moral anarchy’. His views resulted in a full postbag the next month…and the month after that.

‘11 million to march for Jesus’, read the cover of June 1994’s Alpha magazine. Christians in 167 nations would take to the streets to ‘unite in prayer, praise and proclamation’. Gerald Coates said at the time, ‘I’m convinced that in years to come, future generations will look back on June 25th 1994 as a day that changed the world.’

A variety of articles about revival appeared throughout the 90s. What became known as the Toronto Blessing began in January 1994. By the summer months, every cover story of Alpha was devoted to the topic: ‘Rumours of Revival’ (July), ‘Revival Fire: Has the flame been lit?’ (August), ‘Prayer & Revival’ (September). By March 1996, questions were still being asked as Alpha printed ‘A blessing beyond belief?’.

‘Where is God on the Information Superhighway?’ was the question posed by Alpha in May 1995. The verdict…‘It can certainly be of use to people of all denominations’ and ‘is certainly becoming a global phenomenon’. A few months later Steve Chalke wrote (with surprise) that ‘Anything that can appear on a computer monitor can be distributed through the Internet.’

Following the death of Princess Diana, the magazine placed a picture of her with Mother Teresa on the front cover of the November 1997 issue. The magazine reflected that ‘In a secular culture that still aches for spiritual values of some kind, she slipped easily into the role of an icon of care’.

Following the Stephen Lawrence inquiry, Joel Edwards wrote in January 1999, ‘The name of Stephen Lawrence will go down as a sad indictment on racism in our society in general and the police force in particular. It will also be a reminder that, with few exceptions, the Church was largely silent throughout the whole ordeal. Let’s pray that we will find our voice in support of people seeking justice.’ 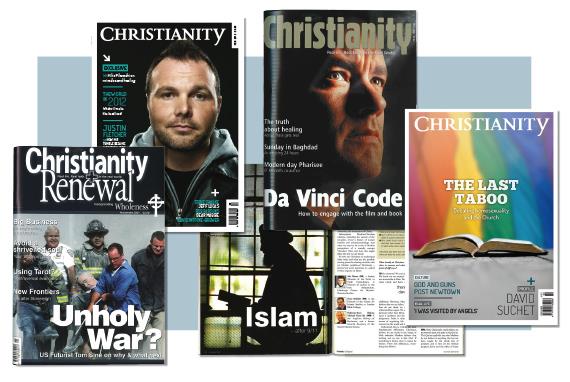 The front page of Christianity & Renewal, November 2001, showed the aftermath of 9/11. Inside, the magazine interviewed futurist Tom Sine who pointed towards US foreign policy as a possible cause for the attacks.

The year 2002 marked ten years since the publication of The Message paraphrase of the Bible. John Buckeridge reported (September) that it had sold over 6 million copies ‘thanks mainly to word of mouth recommendations’. He praised Eugene Peterson for his ‘vivid, fresh and contemporary take’ on the scriptures.

The rise of Islam and the aftermath of 9/11 prompted a discussion over  ‘whether Islam is a peaceful religion, and how we can share our faith with Muslim neighbours’ (November 2002). The article advocated that we should neither view Islam as a ‘satanic counterfeit’ nor argue that all religions are the same.

As the threat of war between the US and Iraq grew, Lynn Green wrote in April 2003’s ‘Praying through the news’ section, ‘Nearly everyone agrees that Saddam must go, but many doubt that a military offensive is the appropriate means. Surely there is a solution that does not abandon the people of Iraq to tyranny, nor to wholesale assault.’

As the nation geared up for the long anticipated release of The Da Vinci Code film, Christianity said (May, 2006) that it presented ‘a major opportunity’ to talk to friends about the heart of the gospel.

In April 2009, Paul Wooley wrote, ‘The recession is getting worse… Instead of spending, we’re being cautious…If no one spends, the economy is doomed’.

Much coverage was given to the controversy around Steve’s views against penal substitutionary atonement theology (‘Cross Purposes’, September 2004) resulting in a symposium by the EA. This controversy was eclipsed by an even greater one when he came
out in support of committed gay relationships (‘The Last Taboo’, February 2013).

We hope you’ve enjoyed a whistlestop tour through the magazine archives as much as we’ve enjoyed rifling through past editions of the magazine while researching our 50th anniversary special. Read more about the magazine’s history and all the extra fun stuff we couldn’t squeeze in here.

LIMITED OFFER: To celebrate our 50th birthday, we’re chopping a massive 50% off the Premier Christianity subscription price. That’s only £19.40 for 12 issues. Click here to subscribe!

You can also request a free sample copy. Or request 50 FREE copies for your church.