The nightmarish opening minute of US TV smash The Leftovers tells you most of what you need to know about the show.

A mother straps her screaming baby into a car seat; a moment of frustration during a banal trip to the supermarket. Then, suddenly, and seemingly just as unremarkably, the screaming stops. But the baby isn’t asleep. The baby has gone. The woman starts screaming instead.

A little way up the street, a young boy calls for his father, who also appears to have disappeared. All around this nondescript town, pandemonium sets in. At this point the grim premise of the show is revealed: at that exact moment, 2% of the world’s population has spontaneously been removed from the surface of the earth. A rapture, if you will.

Almost two decades ago, authors Tim LaHaye and Jerry B Jenkins chose a similar premise for their Left Behind series of novels, which sold more than 65 million copies and has now spawned a big screen adaptation starring (almost unthinkably) Nicolas Cage.

The 16-book saga chronicled an imagined seven-year period of tribulation, during which God judges the post-rapture world and a remnant band of believers battles an antichrist. I’m inclined to argue that the books are poorly written nonsense. More soberly, they reflect a dispensationalist viewpoint that many Christians would challenge theologically.

Unlike this infamously divisive series, The Leftovers doesn’t present a specifically Christian perspective on the event. However, it is significantly concerned with religion and with faith-based responses to crisis, trauma and grief.

Author and screenwriter Tom Perotta, who penned the original 2011 The Leftovers (St Martin’s Press) novel (and co-created the TV  version with Lost showrunner Damon Lindelof), isn’t a believer, but he is respectful of Christians. This isn’t an attack on theology or faith, but an exploration of how these concepts offer a range of interpretations for people who are addressing the unexplainable.

The Leftovers centres on police chief Kevin Garvey (Justin Theroux) and the fictional community of Mapleton, New York, in which he resides. While none of Garvey’s immediate family were ‘taken’ in the mysterious event known mostly as the ‘Sudden Departure’ (or by the date of its occurrence, October 14th), his home has nevertheless been shattered by its aftermath.

Garvey’s daughter still lives with him, but their relationship is under constant strain. Meanwhile, his wife and son have both come under the influence of two very different quasi-religious movements and have left the family home.

More than the ‘rapture’ hook, this is the real centre of the story, played out through and beyond the members of the Garvey family. It raises the question: how would normal people cope if something earth-shatteringly tragic and yet utterly unexplainable happened right in the midst of our comfortable, 21st century lives?

Perotta’s hypothesis seems to be that, in a vacuum of explanation, religion rushes in to fill the space. The story portrays three very different responses to the event, each of which seems as natural and believable as it is flawed. While all three could be seen as a snipe at established religion, Perotta denies that this was his intention. He claims each offers an insight into how faith can play a key role in dealing with grief, and how human interpretation can take that faith in some very strange directions.

One of the key characters in the book is disgraced ‘faith healer’ Holy Wayne (played by British actor Paterson Joseph); a once-average man, bereaved on October 14th, who realises he can take other people’s pain upon himself, like a kind of emotional sponge. While this begins as a low-key and entirely earnest endeavour, the influence and interest he attracts soon transform and corrupt him.

Holy Wayne is endowed with a mysterious spiritual gift, but is quickly tempted to spoil it. If this were Christian literature, he would be the charismatic prophet whose ministry is derailed by a moral fall. However, Perotta is more concerned with the character’s attractiveness to others – including Kevin Garvey’s son Tom – and how apparently miraculous powers can be enough to engender faith and devotion among potential followers.

Former Doctor Who star Christopher Eccleston plays the most recognisably Christian character; a former minister whose faith is severely tested by the fact that he has been ‘left behind’ in an apparent rapture.

Eccleston’s character Matt Jamison concerns himself with debunking false beliefs about the Sudden Departure, taking pains to point out that   those who were taken weren’t just Christians but also atheists, Muslims and Buddhists. He is the face of the established Church, struggling to provide answers when nothing seems to quite add up in the unexpected light of a brave new world.

For me, he evokes the famous passage in Rob Bell’s Velvet Elvis: Repainting the Christian Faith (Zondervan), in which the author hypothesises on whether our faith would be ‘springy’ enough to survive a revelation that, say, the virgin Mary wasn’t really a virgin. After an apparent rapture that didn’t fit the biblical version he had understood and imagined, Jamison finds himself living that challenge for real.

THIS ISN’T AN ATTACK ON THEOLOGY OR FAITH

Most interesting of all is the Guilty Remnant; an entirely new religious cult that takes elements of monasticism, puritanism and Friedrich Nietzsche and jumbles them in a blender. Some of the residents of Mapleton react to the tragedy by disappearing into their own sense of guilt about the way they have lived their lives. Abandoning their families, living in a silent commune and – strangest of all – taking a vow to chain smoke since the last days are rapidly approaching, they stalk the rest of the community with a mission to make those guilty feelings contagious.

The Guilty Remnant represents a bizarre warping of evangelicalism, calling others to join and repent, but  offering no conciliatory messages of forgiveness or mercy. It’s the gospel without hope; Good Friday with no hope of resurrection. Might such a thing happen in reality? The Guilty Remnant is arguably already among us in the form of groups such as the funeral-picketing Westboro Baptist Church.

THE GUILTY REMNANT REPRESENTS A BIZARRE WARPING OF EVANGELICALISM

RAPTURE’S DELIGHT  It might seem strange that a non- Christian novelist would choose the rapture as his theme, or that TV bosses might think they could make a hit programme from the concept. The strong language, violence and sexual content in the show, while not on a par with Game of Thrones, are certainly enough to deter the sizeable US Christian audience. 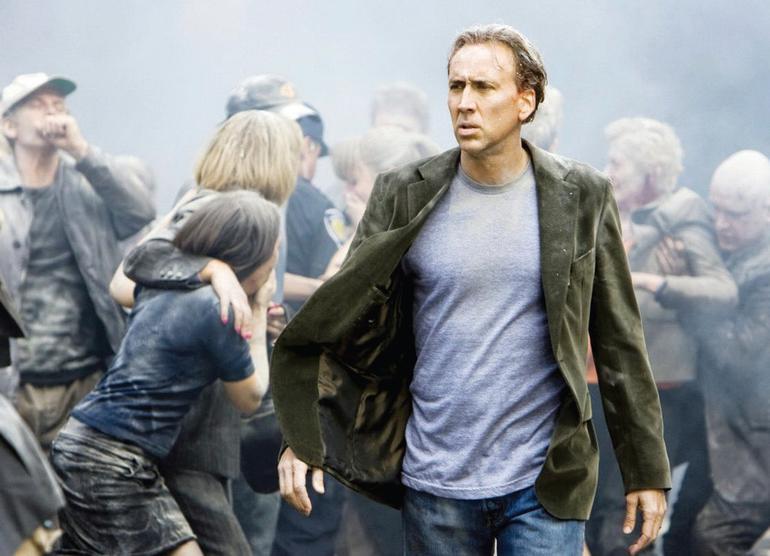 Just recommissioned for a second season, however, the show has found an audience in its home nation and is expected to do well in the UK when it arrives on Sky Atlantic this autumn. So why is a fairly obscure and much contested element of Christian theology so fascinating to those without faith?

Partly because it’s simply an intriguing sci-fi concept. Author Stephen King has called Perotta’s novel ‘the best Twilight Zone episode you never saw’. Beyond that, what makes the rapture so intriguing is not the idea of what it would be like to be summoned up to heaven, but what would become of those who weren’t.

While LaHeye and Jenkins took that concept in a fantastical and often implausible direction with Left Behind, Perotta plays the whole thing much straighter.

The Leftovers is at its most interesting when it is a reflection on human grief, suffering and confusion about the big questions, and when it causes us to ask of ourselves, what if...?

The end times have inspired a plethora of films, books and even video games. Here are just a few...

THE MARK IV MOVIES  These might look laughably bad now, but in the ’70s and early ’80s, this series of post-rapture US sci-fi movies did big business within the Bible belt. Perhaps the greatest moment comes in Image of the Beast, in which we are expected to believe that an old man with a dot on his forehead and a calculator round his neck is a robot antichrist. Seriously.

THE APOCALYPSE SERIES  This 1998 film (and its three sequels) follows two reporters covering an impending war in Israel who suddenly realise they have been ‘left behind’. Like almost all other rapture films, it is convinced that a computer programme stored on a floppy disk will cause the eventual Armageddon. But wait, Mr T is in the fourth film, Judgment! So skip straight to that one.

LEFT BEHIND VIDEOGAMES  There are four successful videogames based on LaHaye and Jenkins’ novels, in which players attempt to convert gangs to Christianity instead of killing them. The series attracted huge criticism in the US for promoting religious bigotry and essentially promoting the ‘kill or convert’ strategy that was once employed by the Spanish Inquisition.

Many Christians (including dispensationalists and futurists) believe that, at a time and hour unknown (Matthew 25:13), God will trigger an elongated Apocalypse involving various prophecy-fulfilling elements, which is why there were so many Left Behind novels. These events include:

The rapture: Where the faithful will be taken at once (with the dead rising first) to literally meet Jesus ‘in the air’ (1 Thessalonians 4:16-17). Some believe that a remnant of Christians will be left behind to represent God on earth, or – as in The Leftovers – that many will convert after the event.

The tribulation: While the followers of Jesus are safe in heaven, things on earth will get unpleasant. Various biblical prophecies will now be fulfilled, most notably the series of ‘seal’, ‘trumpet’ and ‘bowl’ judgements outlined in Revelation.

The rise of the beast: Christian futurists believe that a revived Roman Empire will oppose the last remaining Christians on earth. This empire will be headed by an antichrist bearing ‘the mark of the beast’, often understood as the number 666.

The last judgement: It all ends well, but only for God’s people. The final judgement day sees the rest of humanity cast into an eternal hell, along with the antichrist and his followers.