Sally Phillips: Why my son’s Down’s syndrome reminds me of God

Many mothers take time to reflect on their birth experience. Sally Phillips, of Bridget Jones fame, is not alone in that. What makes her experience unusual is that her son’s Down’s syndrome was not picked up by her pre-natal tests. When the diagnosis was given ten days after Olly’s birth, the doctor presented it as bad news. But Sally soon learned that parenting a child with Down’s syndrome, while challenging in many respects, is also a life affirming and beautiful experience.

In an interview with Elizabeth Day, Phillips reflects that “something important has happened and you’re going to have to let go of some of the dreams you had, but it’s really not as bad as everyone makes out.”

Sally converted to Christianity as an adult and says her faith has been deepened by the experience. She goes as far as to say that her son Olly has taught her about the “topsy-turvy topology” of the kingdom of God who “uses the weak to shame the strong” and “promises to frustrate the intelligence of the intelligent.”

When we spoke to Sally earlier this year, she gave an insight into parenting a child with Down’s syndrome, “The picture people have of Down’s syndrome is very outdated and based on the Wikipedia entry, which is just a list of potential capabilities. But actually living with someone who has Down’s syndrome is fantastic. The highs are higher and the lows are lower. It’s like living in a sitcom a lot of the time. They say comedy is tragedy played at 120mph. Some people look at us and think we’re sad. We’re not having a sad time most of the time. We go on holiday and Olly disappears on the baggage carousel. Where’s my child? And there he is coming round. It’s funny!”

When asked if her faith has helped her during the more difficult moments Sally answered, “Is it that I deal with it better and more heroically because I’m being supported by God? Or am I being particularly blessed by God? I think I am being particularly blessed by God in this family unit.  Independence is the world’s highest aim. But with Olly, we as a family are less independent. And you know what? Life isn’t about A levels. I feel I’ve been given a present. I’ve been given a Narnia cupboard which I can look through and see things God’s way. ‘[I’ve chosen] the foolish things of the world to shame the wise’ [1 Corinthians 1:27]. And ‘the intelligence of the intelligent I will frustrate’ [1 Corinthians 1:19]. 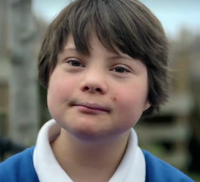 I was so ashamed. I didn’t want to get to know the neighbours at all! But these were really, really nice people and they repeatedly didn’t mind Olly climbing over. Now we put ladders up against the fence and the kids come and go freely between our gardens. We only buy one paddling pool. So Olly’s refusal to behave in a socially acceptable way has very literally broken down fences between us and them. My youngest son is best friends with their youngest son."

It is from this fresh understanding of God’s kingdom, shown through Olly, that Sally has taken advantage of her platform to give voice to those with Down’s Syndrome by backing the “Don’t Screen Us Out” campaign.

In doing so Sally believes we lose something important that people like her son Olly offer, saying ‘I really think that [he] is more like God’s picture of how we should be. I feel we’re being specifically blessed through his difference.”