Aggressive secularism and extreme Islam seek to confine Christians to their church buildings, where it is hoped they will atrophy and die.’ So says Bishop Michael Nazir-Ali, and he’s not about to take it lying down!

In this title, the author tackles a wide range of topics such as designer babies, a boy’s need for a father, women and the veil, and euthanasia. A Muslim family background and a deep Christian faith have given Bishop Michael profound insights. He explains: ‘The difference between Islam and Christianity is the difference in the attitude to power. Christianity teaches that it is by giving up power that you change the world. Islam teaches that it is by taking power that you change the world.’

Nazir-Ali describes the Church and the Anglican Communion as being in crisis and facing a fight against ‘totalitarian ideologies’. He also has great nostalgia for our Christian foundations. The book contains strong opinions and occasional wishful thinking about society’s need to revert to our historical roots of faith. The sheer breadth of Nazir-Ali’s agenda means his material sometimes comes over as a collection of disparate essays rather than a book with sustained focus. Nevertheless, this is a scholarly and corageous contribution. PV

With the Church seemingly haemorrhaging millennials, Tom Sine urges Christians to draw on the passion and wisdom of an emerging generation.

Live Like You Give a Damn! is full of inspiring examples of young people making a tangible difference in their local communities. Sine writes: ‘As followers of Jesus, we are called not simply to limp through life but to join those who are reaching as high as they can to create their best lives.’

However, the book seems to be written for people who already know a budding social innovator and have access to a large, supportive and well-resourced church. Sine also maintains a heavy focus on the under-35s becoming social innovators. It sometimes feels like older Christians are merely there to cheer from the sidelines.

That said, Live Like You Give a Damn! will cause readers to examine their contributions to society, and ultimately it presents a challenge for us all to be more creative in outworking our Christian faith. RJ

THEY SAY WE ARE INFIDELS

‘They take everything from us but they cannot take God from our hearts.’ These impassioned words from the Archbishop of Mosul, Nicodemus Daoud Sharaf, capture the feelings of many persecuted Christians in Iraq and Syria who have told American journalist Mindy Belz their stories in They Say We Are Infidels.

Belz has travelled through war zones to gather these stories. She meets Faso, a youth minister kidnapped and let go after six days, who is fortunate to be alive, and Pastor Yacoub, who has seen a rapid decline in church attendance but who stays, saying: ‘I love my country and I covenant with the Lord to serve Iraq.’ All of these Christians are determined to live out the gospel in the face of ISIS attacks.

They Say We Are Infidels is an intense read. As the years pass, persecution of Christians escalates and the atrocities become harder to bear. However, it is important to hear from the forgotten people of Iraq and Syria, who continue to live through incomprehensible horrors with little hope. They need our prayers. AD

WHERE THE LIGHT SHINES THROUGH

Switchfoot’s tenth studio album is a cracker! The musical intelligence on this record is particularly pleasing. Title track, ‘Where the Light Shines Through’ references how we grow through the pain of life, and it’s clear that Switchfoot are a band who have weathered the storms and are writing about faith from a real and gritty perspective.

‘I Won’t Let You Go’ is an outstanding song, hingeing around a hypnotic central guitar motif with an impassioned lead vocal. Like all great songwriters, lead singer Jon Foreman tells great stories. ‘The Day That I Found God’, begins with the line: ‘Morning comes like an enemy soldier, I feel a weight across my shoulders.’ The listener is hooked until the payoff line: ‘The day I lost myself was the day I found God.’

The production always allows the songs to breathe and doesn’t clutter the record. Where the Light Shines Through is an album that will take you on a journey; a journey you’ll want to take time and time again. NB

OF DIRT AND GRACE: LIVE FROM THE LAND

The concept for Hillsong United’s new CD/ DVD package – recording worship songs in the places where Jesus walked – is so brilliantly simple it’s surprising that no one else has thought to do it.

Admittedly, transporting tonnes of video and audio gear around Israel is a logistical nightmare, and the band initially wrote the idea off as ‘impossible’. But months of planning really paid off.

From desert plains to lush hilltops, the band has selected stunning locations to record stripped-back renditions of songs from their brilliant last album, Empires.

In a beautiful marriage of song and scenery, the band performs ‘Street Called Mercy’ on the Via Dolorosa in Jerusalem, ‘Prince of Peace’ at a war memorial, ‘Here Now (Madness)’ outside an empty tomb near Golgotha and ‘Captain’ on a boat ‘adrift on the Sea of Galilee’.

All this makes Of Dirt and Grace the most exciting concept album of the year so far. It just goes to show that simple ideas are often the best ones. SH

THE PRACTICE OF THE PRESENCE OF GOD Brother Lawrence 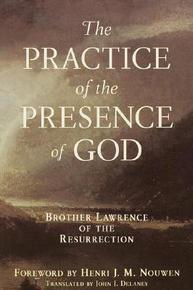 The Practice of the Presence of God (Dover Publications) by Brother Lawrence has come to my rescue many times over. I first read it as a teenager. I longed to do something special for God but undiagnosed dyslexia labelled me a ‘failure’. As I painstakingly read the book I met someone else who was branded ‘illiterate’, yet he has helped thousands over the last 300 years by sharing his personal, intimate relationship with God.

Lawrence wanted to be a monk because he yearned to live perpetually in God’s presence. At the monastery, however, he was told he was only fit to be a skivvy in the kitchen. He was devastated as he heard the ‘real monks’ worshipping in the chapel. But gradually he understood that God was there, present with him, and each menial task could be done as an act of worship. This discovery filled Lawrence with such joy he often danced around the kitchen!

The book taught me that I don’t need to do any great, world-changing things to please God. I can live an ordinary life, loving him through small, everyday actions.