THE RISE AND FALL OF THE COMPLEMENTARIAN DOCTRINE OF THE TRINITY

June 2016 witnessed a doctrinal earthquake. The complementarian doctrine of the Trinity, which had been gaining ground for two decades, was suddenly and decisively rejected by complementarian theologians. This excellent book from Kevin Giles tells the story of this upheaval.

The complementarian doctrine of the Trinity emerged in 1995, in Wayne Grudem’s Systematic Theology (Zondervan). Grudem argued that the three persons of the Trinity have different eternal roles, and therefore the Father deserves greater glory and exercises greater authority than the Son or the Holy Spirit.

By 2016 Grudem’s hierarchical view of the Trinity appeared to be dominant among white Englishspeaking evangelicals. But Giles believed Grudem’s doctrine is at odds with Church teaching since Nicaea. And when Grudem and Giles went head-to-head at the 2016 Evangelical Theological Society conference, Grudem was forced to acknowledge that he was mistaken, at least in part.

In the wake of the debate almost every evangelical of note publicly rejected Grudem’s doctrine, and reaffirmed the absence of subordination in the Trinity.

The book is important, not merely because it’s a helpful corrective to recent teaching on the Trinity, it also deals with why so many complementarians embraced this heterodox view. Giles argues that the overriding desire to assert male headship led complementarians to read subordination into the Trinity.

Giles’ book deals with abstruse theology in a clear and engaging way. He says little about the implications of this debate for gender equality, acknowledging that complementarians retain their commitment to male headship. Yet, Giles’ analysis exposes the dynamics within complementarian circles. When Grudem’s doctrine was first critiqued by Rachel Miller and Aimee Byrd, male theologians paid little attention. It was only when male writers weighed in that complementarians took note. RB

The book challenges the reader to examine whether they live for God’s approval or that of other people. Drawing on the richness of Paul’s letter, it argues that freedom is found “not through the wild excesses of licence or the works of the law” but “through life in the Spirit”.

The author’s dip back into the Protestant Reformation is enlightening and acts as a helpful introduction to that period in the Church’s history. There are authentic voices from the Reformation included at the end of each chapter, as well as questions and reflections for study.

Supported by his interpretation of scripture, Chester boldly writes that Catholicism has it wrong in putting an emphasis on works over faith, giving the Pope iconic status and in their adoration of Mary. His conversational style is straightforward, and his statements of faith unwavering and real: saying what we need to hear and giving us the means to make a change. All this results in a hugely helpful book. AD

A NEARLY INFALLIBLE HISTORY OF THE REFORMATION

This month sees the 500th anniversary of the event that is said to have started the Reformation – Martin Luther nailing his 95 Theses to a door in Wittenberg, Germany. Given the enormous impact of the Reformation, we all need to have a grasp on its main events, and this book gives us an excellent introduction. It is not a straightforward history, though there is a huge amount of history in it: well-researched and wellwritten. Nor is a comedy, although there is plenty of that as well. Like Page’s other books, it’s a mixture of the two.

The Reformers are portrayed with all their downsides, as are those they opposed: even the saintly Thomas More has his halo knocked askew. The myths of the Reformation are challenged – Luther probably didn’t nail anything to a door – and his potty mouth is on full display.

The book attempts to cover the entire Reformation which, confusingly, did not start from Luther and then spread outwards – it was more a series of small fires that eventually joined up. So the book does inevitably jump around from Germany to Moravia, Rome to Paris, England to Scandinavia. All the main characters are here – not just Luther, but Calvin, Zwingli, Cranmer, the Anabaptist leaders and so on.

This is an accessible and entertaining book to enjoy. It will also make you laugh, meaning the learning slips down easily. It would have benefited from a bibliography, both to show the author’s sources and provide ideas for further recommended reading. AH

LUTHER AND THE JEWS

In Luther and the Jews Richard Harvey, associate lecturer at All Nations College, examines Luther’s anti-Jewish writings and their use and impact on the murder of 6 million Jews in the Holocaust. Harvey’s book makes for uncomfortable reading. The author, himself a Messianic Jew, closely examines the person, life and writings of Luther and a history of the Jewish people. Harvey’s family, the Hirschlands from Essen, were victims of the Holocaust. He writes, “Those who left Germany survived, those who stayed perished.”

The book also explores what might have happened had Luther not been so anti-Semitic. Harvey considers current attempts at reconciliation between Jews and Christians. And he dreams of dancing an Israeli circle dance, the Hora, in heaven. Jews and Germans will dance together, reconciled, forgiven and pain-free.

History must be revisited before forgiveness and reconciliation are possible. This is a timely and helpful book but there remain many dance steps to learn. PF

This exceptionally well-produced documentary retells the life story of Martin Luther and features commentary from leaders and scholars such as RC Sproul and Carl Trueman.

The 90-minute film has been produced and funded by fans of Luther, meaning some of the Reformer’s more troubling character traits are not dealt with as robustly as they perhaps should have been. For example, although the film mentions Luther’s temper, it fails to quote his most extreme bad language. Perhaps the filmmakers wanted to spare the ears of its Christian audience?

The decision to only feature male voices from the USA and UK is somewhat grating. Presenter Barry Cooper has filmed his engaging and well-scripted pieces to camera on location in Germany, yet not one scholar or church leader from mainland Europe, let alone Germany has been interviewed for this lengthy documentary.

Despite this, Luther is a helpful, accessible and mostly fair portrayal of the man at the centre of the Protestant Reformation. SH

LOVE HAS A NAME

Love Has a Name feels like an old friend. It’s warm and familiar thanks to Jesus Culture’s characteristically powerful and evocative melodies and the unmistakeable vocals of Kim Walker-Smith, yet it also carries a fresh and contemporary tone due to the sophisticated use of synth sounds.

There’s a sense of wonder in the catchy opening song ‘Halls of heaven’ while the emotive ‘Flood the earth’ and ‘However you want’ have a more reflective tone.

Walker-Smith’s spine-tingling vocals during ‘Never stop’ help the album to ooze with enthusiasm and fervour. This is also found in the passionate ‘Fresh outpouring’ and blissfully melodic ‘Make a way’. As the album closes with the peaceful ‘Anything can happen’, it feels as though we’ve been taken on a spiritual journey from uncontainable excitement to quiet contemplation.

Love Has a Name is an invitation to come as you are before God, to worship, to praise and to love with the whole of your heart. KH

New Orleans indie-pop band Mutemath have got their swagger back on this playful and psychedelic return to form.

The band’s trademark fussy intricacy is still on full display, but Play Dead reinvigorates the formula, sweeping the flat dance-pop of previous album Vitals under the rug. Crunchy guitars and rattling hi-hats breathe life into the technicolour swamp of synths, with a sense of effortless adventurousness.

This is an album preoccupied with the idea of the afterlife as a realm of hope-filled possibility; far from didactic, it’s a thought-stirrer that muses on human nature, personal legacy and the great unknown. Often, faith in these songs feels more like doubting your doubts, swimming upstream against the overloaded cacophony of a pluralistic age. ‘Achilles heel’ is the conflicted climax, frontman Paul Meany rue-ing his judgmental days but still gripped by the ticking clock, the spectre of death over a sleepwalking people.

Despite weighty themes, Play Dead is a joy to listen to. CD 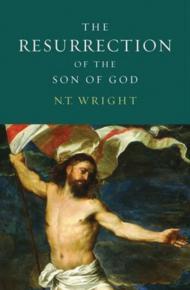 THE RESURRECTION OF THE SON OF GOD NT Wright

It was the summer of 2004 when I started my journey through all 800 pages of NT Wright’s The Resurrection of the Son of God.

As others had claimed, this book is the greatest historical defence of Christ’s bodily resurrection written in the past century.

But what changed my life was the way Wright takes us through the major New Testament authors, showing how they interpreted all of world history in light of the resurrection. In the Apostle’s Creed, when we say “I believe in the resurrection of the body”, we refer not to Christ’s past resurrection but our future one. Wright also showed me that Easter is not the happy ending after Good Friday, but the happy beginning of God’s new creation. The future has burst into the present!

By the end of the book, I knew my faith in the risen Jesus would never be the same.

DR ROBIN BUNCE is a historian of ideas based at Homerton College, University of Cambridge

PATRICK FORBES is a retired communications officer who enjoys sailing, music and writing

CHRIS DONALD is a music producer, filmmaker and designer