Rohr has the ability to unmask addiction in every reader without provoking their protest and he moves you from being an outsider looking in to being an insider looking out. This book offers us all a taste of the deep compassion of Christ towards and within our communities. Rohr explains, ‘Only a suffering God can “save” suffering people. Those who have passed across this chasm can and will save one another.’

My only critique is that Breathing Under Water makes the Twelve Step Programme infinitely more complex. I say this with hesitation, since Rohr has the ability to make theological truths easily comprehensible. But it is hard to believe that this book would be accessible to the average addict that might attend an AA meeting. The language is often dense and the referencing and ecclesiology make it feel heavier than is necessary. It is something of a shame that Rohr didn’t risk his academic credibility to create a book with more accessible spiritual insights that would illuminate the Twelve Step Programme for a broader readership. Indeed, one can only imagine the impact of his wisdom if it could be consumed easily in the meeting halls and community centres where so many addicts gather weekly. This is a truly great book, but I fear it could have impacted so many more than it will. WVDH

Joyce Meyer’s latest book is one that the majority of adults would benefit from reading. Overload teaches the reader to identify where they might be living with stress and how to begin to defeat it.

Meyer describes her own experience of burnout. Because she knew she was operating in the will of God, Meyer imagined herself to be immune to stress. The unwelcome discovery that she was indeed suffering from stress brought with it a change of perspective and ultimately a different approach to life.

Meyer gives valuable insights into where stress comes from. This is a book full of encouragement and an exhortation to love and good works. In a gentle way, making reference to her own former weakness in these areas, Meyer firmly directs the reader away from negativity and self-centredness. Overload is full of practical reminders of how to better love God, our neighbour and indeed ourselves, so as to avoid situations which generate stress. CI

The call to holiness is age-old yet ever new. Simon Ponsonby doesn’t shrink from making his call both sharp and personal. He is honest about his own faults and struggles and the book benefits from a careful mixture of biblical stories, teaching and scenes from contemporary life.

The chapter on kindness was particularly striking. It is a quality so important on any pilgrimage towards holiness, and yet is sadly missing from some of our solemn assemblies.

The ‘Religion is Nuts’ chapter explores the challenge the Christians at Colossae posed to St Paul. The dangers of religion based on rules are still with us. Ponsonby concludes that ‘if our religious efforts amount to anything, Christ died unnecessarily. Religion is for nuts. Let’s leave it to the nutters’.

This well-written book is not an easy read any more than the holy life is easy. It deserves slow and careful attention, as there is plenty to ponder here. PF

For a generation of young people, sub-Justin Bieber pop is infinitely more relevant than 100 more-musical Matt Redmans. This is the primary reason why Hillsong’s youth band Young & Free works so well.

Prior to the group’s first album (released in 2013), worship music aimed at young people didn’t sound distinct from its grownup predecessors. As good as We Are Young & Free was, the awkward truth was that it sounded like a traditional worship album with added synths.

But you can’t say that of Youth Revival. At its best this new album doesn’t sound like any worship record you’ve ever heard before. Instead, songs like ‘Where You Are’ rival the innovative pop music in the mainstream. You can’t fully divorce the album from its roots however, and ‘To My Knees’, does sound like mid-2000s Hillsong by numbers.

To misquote Star Trek, it’s worship music, Jim, but not as we know it. Is it consistently brilliant? No. Is its very existence the most important thing happening to worship today? Quite possibly. JC 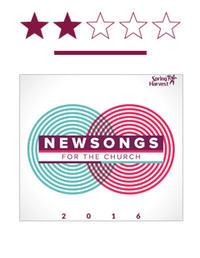 As the title suggests, Spring Harvest’s Newsongs for the Church showcases this year’s crop of songs from some of today’s best-known worship songwriters including Tim Hughes, Matt Redman and Rend Collective.

The album makes for a pleasant listen – it is mostly mellow, with a few pop-dance numbers thrown in. But right from the beginning, it is predictable. Opener ‘Every Giant Will Fall’ reinforces the old stereotype that worship songs all sound like U2 and/ or Coldplay. This is ironic, given that Spring Harvest’s theme for this year is ‘Game Changers’…

That said, the tracks with a Celtic or country vibe to them (‘I Will Hope’ and ‘Alleluia He Has Loved Us’) are enjoyable. The hymn-like ‘How Sweet the Sound’ is another favourite. But for an album aimed at presenting new songs to the British Church as a whole, this record could have benefited from being a bit more culturally diverse than it is. A little more sparkle in the production would have helped as well. GL

Years ago, Mal gave me this book after I heard him speak at a church in London. I’m embarrassed to admit that it sat unread in my bag for a very long time, but eventually I got round to reading it while on holiday. Little did I know the long-lasting effect this book would have on me and my approach to ministry.

Mal explains that people don’t really want fame. They want influence. The mainstream media is perpetually promoting the celebrity lifestyle, but what we crave is the ability to influence the world around us, to make a mark that counts for eternity and to leave a legacy.

Through reading this book, I experienced a massive paradigm shift. I was soon compelled to step out in faith and embark upon an itinerant ministry venture of my own, which I’m still running with.

I’m so thankful to God for this book, and for Mal’s faithfulness in writing it. I highly recommend it to anyone who recognises the pioneer spirit God has placed within them.