Have you ever read a book’s publicity, thought “This is going to be completely daft!” and then read it only to find it overturn your expectations and be an insightful read? This is not one of those books. The Chamberlain Key is a breathless account of Timothy P Smith’s astounding (some might say unbelievable) discoveries made by unlocking a secret code embedded in the Hebrew text of the Old Testament. The secret code involves some complex maths but mostly means picking out every 16th letter from a few chapters of the Bible. Sometimes the words read back to front, sometimes up or down, or maybe diagonally, so the Bible becomes a divine word search puzzle. How does Smith know which chapters to decrypt? Because God, when he delivered these words to Moses, hid the author’s name along with his date of birth and some other family details at various points in the Bible.

Apparently, the Bible references a Spanish statue of the virgin Mary, 9/11, the rise of ISIS, the rapture and the assassination of John F Kennedy. Inevitably, America looms large in these secret Bible codes, but how else could books like this be sold?

The best bit is the unrelated foreword by Dr Eugene Ulrich on the value of early Hebrew manuscripts. I contacted Dr Ulrich because, as a serious scholar, I was surprised he would be drawn into writing a foreword that could be misread as a commendation. He assured me that his endorsement pertains only to the antiquity and accuracy of the Hebrew text of Genesis, and not at all to the claims of secret codes in the Bible.

The Old Testament is written to reveal, not conceal. Sadly, this book will only serve to feed fanciful speculation and distract from the clear meaning, historical accuracy and purpose of scripture. CS

In Global Poverty Justin Thacker provides a systematic theology that outlines the causes of global poverty and provides a theological framework for dealing with it.

Beginning with a theology of creation, Thacker argues that Christians should allow everyone “to be fruitful and multiply” because we are all created in the image of God. Reflecting on the Fall, he notes that sin pervades social structures as well as individual actions, and requires radical solutions. Thacker presents Israel as God’s vehicle for bringing justice and jubilee to the nations, and then discusses how Jesus’ saving work on the cross should shape theologies of development. Finally, he looks toward the new heavens and the new earth as a motivation for working for justice today.

Thacker is not only a very capable theologian, he also has extensive practical experience of aid work. Global Poverty contributes to practical debates about aid, and includes some cutting critiques of the approaches adopted by major Christian development agencies.

This is a must-read for anyone involved in aid work and for those who contribute to it. RC

Given his use of Christian apologetics, Alister McGrath has continued in the footsteps laid by his intellectual forebear CS Lewis, with an impressive yet accessible book on ‘science, God and the human quest for meaning’.

McGrath presents useful tools to equip thinking Christians, but he also writes with non-Christians in mind, perhaps also making this a good read for your atheist neighbour. The course he charts presents not so much a case for Christianity as the strength of Christianity to handle the mysteries of human nature. By contrast, New Atheism in particular is shown to lack the ability to answer life’s deeper questions.

The book benefits from the research power of an Oxford professor. The ideas of prominent thinkers through the centuries are

deployed tactfully in service of the argument, complete with fully referenced works in the endnotes for the academically inclined.

McGrath occasionally lets loose with a forceful idea here or there. His critique of how New Atheism’s beloved humanism is undermined by its own view of religion as a human construct was especially powerful. But for the most part he holds back from imposing his view on the reader.

Some might wish for a few more straight-up answers from a book about such big questions, but I think in the long run McGrath made the right choice. He provides the reader with a quality toolkit but allows them to come to their own conclusions – because after all, meaning can only be meaningful when discovered, not enforced. BT

This well-written memoir is about Andrea Lucado’s experience of double culture shock. She was an American from Texas, adrift in Oxford, discovering that even the language was not the same. But she was also a Christian, from a solid faith background (her father is the author Max Lucado). Arriving in Oxford to study for a one-year MA, she was suddenly immersed into a university where Christianity was often ridiculed. How would her faith survive? Was the God who was there in sunny Texas really around in chilly Oxford?

Lucado finds a safe place to consider her doubts, and it is here that the book comes alive. It is not didactic – she is not saying her answers will be your answers, or that they should be. It is also a celebration of Oxford; the friendships she made there, and the countryside she delighted in. English Lessons makes for an easy and enjoyable read. AH

What Is The Bible?

Since his controversial questioning of the traditional evangelical understanding of hell in Love Wins, Rob Bell has transitioned from megachurch pastor to self-help guru. There can be no doubt that Bell’s most recent books (The Zimzum of Love and How to Be Here) have been light on theology. But now, the former pastor is going back to what he’s always done best – explaining the original culture of the Hebrew Bible.

Bell is at pains to emphasise these 66 books were written by people in a very different culture to our own. He delves deep into the original context and languages to reveal fresh insights which surprise, enlighten and build faith.

Bell’s enthusiasm for scripture is infectious. Attacking those who claim the Bible is boring, Bell retorts, “If you actually read it, and enter into the stories, and depth and background and context and innuendo and hyperbole, the one thing you will not be is bored.”

Even those with reservations about Bell’s theology might be pleasantly surprised by most of this book. It’s not until Bell attempts to answer questions, including ‘Is it Inerrant?’ and ‘Is it the Word of God?’ in the FAQ section that his liberal slant becomes more pronounced. His answers to ‘What about sin?’ and ‘Did Jesus have to die?’ dramatically fail to communicate anything of the gospel. Bell is so keen to emphasise the human element of scripture, God is often left entirely out of the picture.

Discerning readers will benefit from the first two-thirds of this book. But the FAQ section is best ignored. SH

The Mighty andnd The Almighty

In this book, Nick Spencer, research director of the Theos think tank profiles the religious beliefs of 24 political leaders from around the world. Fascinating in both scope and detail, the book features leaders as varied as Nelson Mandela and Vladimir Putin, while also finding room for Tony Blair, Angela Merkel and Donald Trump. Delving into their public statements on God, he considers both the sincerity of their faith and how it might have shaped their politics.

Spencer focuses on Theresa May as someone who said her Christian faith helped “to frame my thinking and my approach”, adding that she represents a politician with strong views as opposed to a strong ideology. The book’s conclusion suggests that despite the secular nature of many countries – in particular the UK – political leaders still show high degrees of deference and respect for religious faith.

This is a thoughtful, well-researched and enlightening book, which offers a broad spectrum, politically and internationally. RW

Stepping back into first-century Judea, this work of historical fiction evokes a real sense of the traditions and lifestyle of Jews living in Jerusalem at the time of Jesus. It follows the story of Martha from childhood through to when her family first hears of the radical new preacher from Galilee.

Martha is only mentioned in three places in the Bible and so much of her story is imagined. But the book is lengthy, partly because the first half concentrates on using Martha’s childhood to explain the customs of the Jews. Great detail is provided about the Temple as well as the rituals and festivals that communities were expected to engage with.

The pace of the book seemed a little slow until Martha and her family began engaging with Jesus. But seeing the crucifixion afresh through Martha’s eyes, and experiencing how totally bewildered they all were in the time of waiting between his death and seeing him alive, was also compelling. CM

Wonder demonstrates the evolving sound of Hillsong United. What started as a local church youth group’s expression of worship has become a pioneer of new Christian art. The album’s artwork says it all: this record was made for vinyl.

Musically, Wonder pushes the balance of traditional, contemporary and experimental. Songs have been crafted to feature a blend of unexpected yet heart-piercing lyrics set to an eclectic array of pop, rock, synth and acapella gospel – sometimes all on the same track. It will make it difficult for most congregations to adopt the songs into their worship services, but it will also engage a generation who have disconnected from mainstream Christianity.

Wonder is meant to be listened to in full. As frontman Joel Houston writes, it is an “expression of art and music and story” to elevate conversation and reawaken the soul. This album is an invitation to recapture the wonder of the truth of Jesus. Wonder is a worship album for those tired of worship albums. JPA 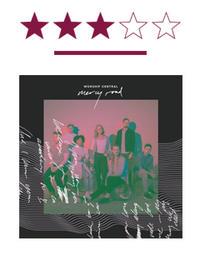 With the big Christian festivals just weeks away, it is likely that this new batch of songs from worship training collective Worship Central will be heard this summer.

Sonically, there’s nothing particularly new or challenging. That isn’t to say Mercy Road is not a pleasant listen; ‘Lights’ is jump-upand-down pop worship, with chorus lyrics lifted straight from the old spiritual ‘This little light of mine’. ‘Pray’, meanwhile, borrows from the Lord’s Prayer.

Worship Central’s aim of equipping churches to engage in worship by providing them with songs and training is commendable. But listening to albums like this does makes me wonder if their good intentions don't just result in the sound of worship becoming even more homogenised. GL

Leap Over A Wall

I grew up in a Christian home and by my mid-20s had got overfamiliar with the Bible, even finding it boring.

But then I discovered Eugene Peterson. I found myself captured, re-enthused and drawn back into this life-shaping book, the Bible.

Peterson is best known for The Message but he’s written masses of other books too. I’ve read nearly all of them, several of them multiple times. My favourite is Leap over a Wall, where Peterson tells stories from the life of David, through them exploring profound human themes such as friendship, grief, love, beauty and sin.

The chapter on wilderness gave me a workable paradigm for suffering. The chapter on beauty was the reason I was able to resist making a rude speech and walking out on a job in the middle of a meeting (long story!). The chapter on sanctuary lifted me from a period of depression.

Many Christian authors mine their own lives for content. Peterson is a Bible-miner. It is largely thanks to him that I am still digging into scripture and still finding life-shaping treasure.