In The Divine Dance, Fr Richard Rohr promotes some ideas that most evangelicals would be uncomfortable with and perhaps even deem heretical. And yet, alongside this sit many more points which caused my heart to soar and my soul to worship God. This humble Franciscan friar seems to have learned to experience and live within the peace, generosity and love of God in a much deeper way than most.

Rohr’s main point is that the three persons of the Trinity exist in perfect relationship, and that we – along with all creation – are invited in to this “divine flow” or dance. Quotable quotes abound: “God does not love you because you are good. God loves you because God is good.” Or “All I can give back to God, and all that God wants, is what God has first given to me: this little moment of incarnation, my little ‘I am’ that echoes the great and eternal I AM in grateful awareness.” Rohr is often challenging too: “Spirit-led people never stop growing and changing…How strange to think that so much of religion became a worship of the status quo” and “The gospel itself is neither liberal nor conservative but severely critiques both sides of this false choice.”

Given the more questionable content, this book probably isn't suitable for a new Christian. It requires discernment. Rohr would be the first to admit he doesn’t have all the answers. He writes, “all human knowing is imperfect, seen through a glass darkly and must be held with humility and patience”. It’s fitting that Rohr writes this sentence inside a book that attempts to describe the Trinity. There is real gold in this book. But you have to dig for it. SH

I was intrigued by this book, hoping to have my faith enlarged by the author’s explanation of how God differs from us in ten areas – how he’s infinite, incomprehensible, self-existent, self-sufficient, eternal, immutable, omnipresent, omniscient, omnipotent and sovereign. But as I read, I didn’t feel wowed. None Like Him is neither deep theology on the one hand nor a book filled with emotionally engaging stories of spiritual transformation on the other.

Wilkin’s main point is that God in his wisdom has created us as limited creatures, and that we would do well to consider his limitless qualities. “I want us to consider the majesty of a limitless God. I want us to meditate on his perfections so that they become to us the most rational object of our reverence and awe”, she writes.

It’s a shame this book appears to have been aimed at Christian women exclusively. Shouldn’t men ponder the all-powerful God too? As it is, None Like Him will be used by women who take the Bible seriously and who want to grow in their faith. Within its own limitations, the book will help women to honour God while recognising how they are created – and thus limited – beings. ABP

The Evolution Of The West

In this substantial but readable book Nick Spencer, the research director at the Christian think tank Theos, explores the historical development of core values in our culture and concludes that despite popular assumptions to the contrary they owe more to Christian influences than atheists would have us believe.

Spencer is honest about past Christian errors and eschews cheap proof texting. His thesis is that Christian faith shaped how we used to think about the rule of law, human rights, secularism, capitalism, the emergence of a scientific culture and the welfare state.

Exploring their historic roots Spencer finds that countries with the greatest degree of democratic freedom have a Protestant past. The roots of humanism were not anti-Christian and many of the early humanists were sincere Christians. He also argues that Christianity was the midwife of scientific endeavour. Charles Darwin was an Anglican and though he lost his faith it continued to influence his thinking and behaviour.

Spencer concludes, “However many wrong turns Christians take – and the essays in this volume show that Christians have had a profoundly ambiguous relationship with some of the demonstrable human goods we now take for granted – the treasure that they purport to bear remains.” This book would be invaluable background reading for anyone trying to share their faith with intelligent non-Christians who think that Christianity is an irrational hangover from the past that has been seen off by the new atheists. ME

This is an excellent read for anyone in a position of leadership in a business, charity or church. It explains why so many leaders often struggle, and gives tips on how to avoid major pitfalls. Smith gives personal examples to back up his points and it’s his honesty that sets this book apart.

Topics covered include gaining respect, developing good communication strategies, incorporating humour, leading by example, staying accountable, delegation, practising generosity and the importance of leisure. While it’s primarily aimed at a mainstream audience, the introduction suggests leaders should model themselves on Jesus, the perfect servant leader. I would have liked to see examples later in the book of how this works in practice within the modern workplace, although this might have made the title less relevant for non-Christian readers.

Leadership books are a bit like parenting books: if you read them all you wouldn’t have time to either lead or parent. But if you’re only likely to read one leadership book this year, this is a great choice. JT

Enriching Our Vision Of Reality

Alister McGrath’s latest book is a thorough overview of the relationship between theology and the natural sciences, drawing on Christian thought, philosophy and scientific theory.

Enriching our Vision of Reality is also firmly rooted in McGrath’s testimony, which he expounds in the preface and references throughout.

Focusing on figures including Charles Coulson, Thomas F. Torrance and John Polkinghorne he explains, “One of the best ways of helping students to grasp ideas is to introduce them to interesting theologians.” This approach worked well, but the Torrance chapter was heavy going. Although not pitched as an academic book, it does require a substantial amount of concentration.

McGrath argues that science is great, but limited. It’s a point grounded by his personal experience: “One factor that led me decisively away from my youthful atheism to Christianity was my growing realisation that the Christian faith made far more sense of what I saw around me and experienced within me than its atheist alternatives.” RJ

Let There Be Light

Hillsong’s new album will confound critics who view the church’s music as musically rich but content poor. Let There be Light balances mystery with majesty, triumph with trial and doctrine with declaration.

The opening track, ‘Behold (Then sings my soul)’ sets the tone and leans on a familiar refrain as we lift our eyes to Father, Son and Spirit. Other standout tracks include ‘Crowns’ which prizes Christ above all else and ‘What a beautiful name’ which recaptures the delight found in the name of Jesus.

Creatively, this album is a timely reminder that God’s hope-bringing light remains constant. It is worth acknowledging the depth of friendship between key writers Benjamin Hastings, Joel Houston, Brooke Fraser, Scott Ligertwood and Marty Sampson: this album is an anthology of songs that have been lived across several lives. This is the major reason why the album succeeds in its goal to provide songs that will resonate with congregations across the world. JPA 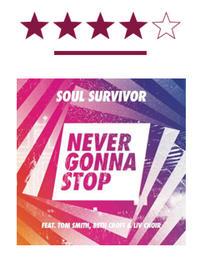 The latest live album from Soul Survivor features worship music that praises God’s power and goodness and lifts our broken spirits. The first three tracks of Never Gonna Stop encompass the joy that is Soul Survivor – celebratory, synth-heavy worship which transports you back to the buzz and excitement of being in a tent alongside thousands of teenagers going crazy for God.

Worship leaders Beth Croft and Tom Smith lead the singing, but the songs themselves are mostly written by others such as Bethel and Hillsong. Some of the best worship songs of the past year are included: ‘The Lion and the Lamb’, ‘Good good Father’ and ‘This I believe (The Creed)’.

Those who prefer a more subdued style of worship may want to skip the opening tracks and begin at track four – ‘O praise the name (Anástasis)’. It’s a beautiful melodic song focusing on the sacrifice Jesus made on Calvary, and the rest of the album follows this more stripped-back style of worship. AM

Tom Wright’s book Surprised by Scripture is filled with knockout statements about the nature and power of the kingdom of God, the full scope of the gospel, and the true dignity of humankind in their “image bearing role” of ruling and reigning here on earth. Reading it is like taking a sledgehammer to box after box that we might inadvertently have put God, the Church, and the world into. This book has re-envisioned me about God's big picture. Wright argues we have reduced the gospel to personal and individual experiences of salvation whereas the intention of God is nothing short of resurrection for the whole of creation, the establishing of the kingdom of God in every sphere, and the reinstating of the authority of humanity as godly stewards. This is a book that addresses some hard questions on contemporary issues, and in the process changes how you think about heaven, earth and the Christian life.