THE SCRIPTURES TESTIFY ABOUT ME: JESUS AND THE GOSPEL IN THE OLD TESTAMENT

If we only get a full and perfect revelation of who God is in the person of Jesus, why do we need to bother with the Old Testament? Bearing in mind that the Old Testament comprises more than 75% of the Bible, how often do you hear preaching from it in your church?

Every other year, The Gospel Coalition organises a national conference. This is the second time they have published the plenary address transcripts as a book. Concerned by a perceived loss of appetite amongst evangelical church leaders to preach from the Old Testament, the GC conference in 2011 set out to explore how Christians should approach it and communicate it.

The result is a taster; eight case studies from as many different pastors opening up passages in Genesis, Exodus, Ruth, Psalms, Ecclesiastes, Jeremiah, Zephaniah and Jesus’ own teaching, from which the title of the book is taken.The contributors (all men and all but one based in the USA) vary in style from the scholarly and brilliant DA Carson to the confessional and open-hearted James MacDonald, and the energetic, conversational Matt Chandler. But the clear Reformed approach is unmistakable throughout.

In some cases (eg Exodus) the text in question contains a type of Christ’s redemption. Elsewhere (eg Ecclesiastes) the focus is more on Christ perfectly satisfying what the passage yearns for. And in others (eg Jeremiah) there is a clear messianic prophecy that Christ fulfils in vivid detail.

This book interested and even enlightened me at times but, unlike the collection from the 2009 conference, it rarely nourished me. It is a little laboured and at times lacks real depth. Nevertheless, this is a decent introduction to the subject and may be especially useful for preachers who struggle to identify and communicate Christ in all the scriptures. JL

SERVANT MINISTRY: A PORTRAIT OF CHRIST AND A PATTERN FOR HIS FOLLOWERS

This slim volume by trainer and writer Tony Horsfall is a meditation on the servanthood of Christ, presented in the form of a commentary on the first Servant Song in Isaiah (42:1?9). Each chapter takes part of the Isaiah passage and unpacks it in a way that sheds light on Christ’s servant ministry and our own calling to be true servants. It includes discussion on the motivation for service, what service can look like, and the link between evangelism and social action. Horsfall also considers the importance of service in shaping our character, and how we can persevere in service throughout our lives, encouraging personal discipline and drawing from Christ’s example.

As it is fairly densely written, it is probably better suited to a group Bible study than personal devotion, particularly since each chapter is accompanied by questions for reflection and group discussion. The premise of the book is that service is for everyone, not only those in full-time ministry. Horsfall’s insights are acute and his biblical scholarship is sound. And given the Church’s need to re-find its servant mission, it feels timely. JM

Having experienced more than a few disengaging Bible study groups, I was excited to come across this book. At last, someone who sees the importance of getting people in home groups talking about relevant issues ? all prompted by the Bible. What a change from wading through a list of questions about the text, the answers to which are all too obvious and fail to prompt meaningful discussion.

Wilcock’s style is simple but effective. Using a minimalist approach, she aims to free participants from dependence upon the group leader so that they can freely express themselves and move from being acquaintances or strangers to family in Christ. She achieves this by a clear, user-friendly format which includes Bible passages, a short commentary, three conversation-prompting questions and a prayer. Topics cover Bible characters, themes from the Gospels, walking in the light, the Church’s year, the life of Jesus and the law and the prophets.

Written in a lively style, Wilcock’s commentaries draw out the relevance of the passage for our daily lives. Although she takes the view that too much additional input in Bible studies is to be avoided, she nevertheless includes additional biblical references, particularly in the Gospels section. Maintaining an objective stance, Wilcock doesn’t shy away from asking tough questions such as ‘Are women designed to be under a man’s authority?’ or addressing life’s realities ? including depression and retail therapy. This practical emphasis encourages people to explore their opinions and talk about real life. MP

Professor Allan Chapman is an academic science historian who writes to help believers defend the faith against modern-day atheists. The ‘dragons’ in the title are secular myths, through which the author exposes the false assumptions underpinning many of the contemporary arguments against Christianity.

This is not a light read but it is rich in content, tracing the evolving connections between science and religion from pre-Christian times up to the present. The author tackles the cultural narratives that have been used to challenge the Christian faith, starting by questioning the notion that atheism is a recent phenomenon.

After an absorbing analysis of popular myths about science and religion, Chapman confronts the lie that science and Christianity are inherently in conflict. Along the way he cites several believing scientists, both ancient and modern. The closing chapters are a heartfelt call to all believers to take courage in the fight against these kinds of myths and assumptions. PV 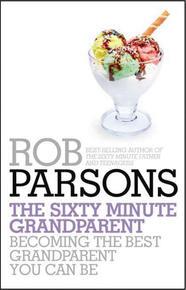 Another brilliant book in the ‘Sixty Minute’ series; Rob Parsons thoughtfully advises grandparents on the wide range of complex family situations that can develop in two generations. His reflections span the time before a grandchild is conceived to the relationship in their teenage years. Recognising the difficulties in setting appropriate boundaries and knowing how best to get involved, the author mentors wannabe grandparents, those who feel ‘put upon’ for childcare, and those who are geographically remote.

In a penetrating analysis of the power of a grandparent, this book combines humorous anecdotes with deep insights ? the fundamentals of which are captured in 60-second reviews at the end of each chapter. I was struck by the idea that grandparents can offer a greater sense of stability and identity to children, and by sharing stories of the past, they can deepen a child’s roots. The real secret, of course, is giving unconditional love. PV