Joyce Meyer’s latest book deals with the problem of bad habits, and there is no doubt that many of Meyer’s fans will find this book helpful. She writes with a deep understanding of scripture, and takes Romans 12:21 (‘overcome evil with good’) as her central theme, suggesting that the key is to overwrite bad habits with good ones.

My worst habit is to read Christian self-help books in the naïve belief that they will be any good. Few are, and Meyer’s rather trite tome is no exception. She gets derailed along the way by secular self-help jargon (‘get the happy habit!’) and as a result has produced a book which is a little too full of insipid observations and truisms for this reviewer’s taste. But others will love it. JM

As a Fire by Burning: Mission as the Life of the Local Congregation

This is a thorough examination of the theology and practice of mission in the local congregation today, and will be of interest particularly to anyone revisiting the values and assumptions behind their church’s current strategy.

The author scrutinises the issues which can influence how we relate to the community we serve ? locality, culture and leadership among others. The content of these chapters, though stimulating, is academic in style and may not appeal to a wide audience. More interesting to this reader were the case studies written by different contributors from a variety of contexts, for example those working with youth, in black majority churches and in cathedrals. These form the central part of the book, and enthused me to get out there and carry on ‘doing the stuff’! CN

In many ways this book is brilliant. It helpfully articulates that we need God to speak to us because he has the answers. Rich Alldritt and Ash Carter have provided an entertaining and easy read ? reminding us that the Bible is all about Jesus.

However, the authors say we shouldn’t expect God to speak outside of the Bible. This can potentially lead the reader to a belief that God is not interested in any issue in their life that is not directly addressed in the Bible. Better perhaps to declare that it is the only place we can be 100% sure of hearing the very words of God. Prophecy, internal hunch, ‘coincidence’, and the excitement of answered prayer, while not possessing the authority of the Bible, are then no longer in danger of being relegated to the scrap heap in our daily Christian discipleship. JW

If you’ve eyed-up the new monastic movement from afar, here’s a helpful guide to developing that flirtation into something meaningful. Reed argues that post-Christendom Christians have more in common with their first millennium ancestors than those from the recent past, and confidently navigates the ancient rugged landscape of Celtic Christianity, with a smattering of input from the desert fathers. Three trusted routes into building authentic community are unearthed: a Way of Life (or Rule), Soul Friends (or spiritual directors) and shared rhythms of prayer.

Deeply rooted in both the Bible and personal experience, Reed provides realistic, sustainable ways to establish these community-building practices in our existing churches and ordinary lives. AL

A revered prophet or God incarnate? Most of us know that Muslims and Christians hold different views of Jesus. But how many of us are aware of the deep Christological debates between Islamic and Christian scholars since the seventh century? A Muslim academic herself, but one who is evidently sympathetic to Jesus, Professor Mona Siddiqui explores this fascinating dialogue, touching on common ground such as Mary and prophecy, but also areas of deep contention: Jesus as the Son of God, the Trinity and the cross.

A surprising theme is that just as Christianity was an offshoot of Judaism, so in some respects was Islam an offshoot of early Christianity, possibly influenced by the Arian heresy which was rejected by the Church at Nicea in AD 325. An excellent book. JM

Faith and the Creeds

Alister McGrath is producing five short guides on Christian belief, written in the style of Tom Wright’s For Everyone series. This is the first.It explores the nature of faith (both in the sense of a living relationship with God and the things that Christians hold to be true) with respect to two of the oldest summaries of Christian belief ? the Apostles’ and Nicene creeds.

The book is written with general readers in mind, so does not assume great theological literacy and is full of anecdotes and references to popular culture. McGrath, as ever, draws much from Dorothy Sayers, CS Lewis and GK Chesterton ? three Christian thinkers with a gift for saying profound things in plain English. Good value as usual from this leading scholar and communicator. JL 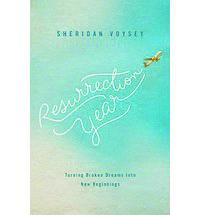 What do you do after your dreams have died? A well-known radio host in his native Australia, Sheridan Voysey and his wife endured ten years of heartbreak as they tried to start a family. Written in short diary-entry form, this book is incredibly moving and a compelling page-turner. Voysey articulates beautifully and honestly the struggles he and his wife faced as they sought to rise from the ashes of disappointment. I felt every pang of sadness and confusion as they grappled with how a loving God allows such pain. It was inspiring to join them on their journey as they found healing, a new hope and a new beginning. While centred on infertility, this book is an encouraging read for anyone who is in the wilderness, looking for the Promised Land. RG

If God then what?

A witty, light and easy read that nevertheless displays plenty of apologetic depth. Perfect for handing to intelligent reasoning friends.

Not an evangelistic book per se, but the work of a respected academic batting at the level of ? and arguably outscoring ? Richard Dawkins and associates. This at times fairly earthily-written argument for why ‘despite everything, Christianity can make surprising emotional sense’ is both rational and spiritual; the perfect gift for a Dawkins devotee.

Yes, it’s an oldie, but pound for pound it’s still the most compelling and well-reasoned argument for the existence and intervention of the Christian God you’ll ever read. Lewis’ Liar, Lunatic or Lord argument ? articulated here ? was the chief reason I left atheism behind in my teens.