If you read only one novel this year, make it Archbishop. It has intrigue, social comment, complex characters, and a plot that builds through the use of flashbacks. And the protagonist? The first female Archbishop of Canterbury.

It’s 2020, and a surprise vacancy in the highest post in Anglicanism results in an even greater surprise with the appointment of Vicky Burnham-Woods. It’s a job she never sought, but she commits herself to fulfilling the role as best as she can. She sets out a five-point vision statement that includes uniting a divided Church, divesting it of cumbersome buildings in favour of innovative church planting, and promoting Christian entrepreneurialism to combat injustice and inequality. But she soon faces opposition, not only from the media and government, but from within her own camp.

It is a brilliant take on what British society could look like in the future, and not only through the influence of a feisty, principled and yet flawed Christian woman in leadership. How would Christians respond to an anti-proselytising law? How much difference do Christians really make in society? What form could cyber-attacks take? How does the media shape current events? How can the Church unite when it is deeply divided on issues such as women bishops or sexuality? What role will the burgeoning number of African Anglicans play? It’s not only about societal issues, but the personal too: what cost do women in church leadership pay in areas such as marriage, parenting, friendship and their own health and faith? And can a woman in leadership ever wear fishnet tights?

You may or may not agree with the vision put forward in the novel, but it will make you think, and entertain you. One not to miss – even if you desire a future without women bishops. ABP

The Future of Biblical Interpretation 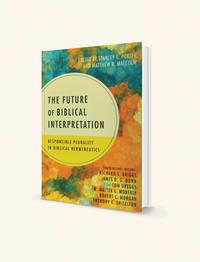 The next battle for the Bible has begun. For the UK Church this was unlikely to be the inerrancy debate or authorship controversies. Instead, the main controversy is how we interpret the Bible. Those who assert that their particular interpretation of scripture is virtually infallible on every subject from baptism to the role of women, clash with others who believe that ‘anything goes’ when it comes to reading scripture.

Evangelicals have traditionally seen scripture as authoritative, yet have been elastic on issues considered to be of secondary significance (ie those ‘not pertaining to salvation’). But will this approach remain tenable for the battle ahead?

The eight essays in this multi-authored book attempt to grapple with how we attempt to interpret scripture responsibly. They were first presented at a conference at the University of Nottingham honouring Professor Anthony Thistleton, whose most significant work was to pioneer the relationship between hermeneutics and the study of the Bible. These are technical papers providing innovative perspectives and will prove hard going for many. Readers will not agree with all the conclusions reached, but this is a timely book raising some urgent questions. KK

Satisfied: Discovering Contentment in a World of Consumption

Rescuing the Church from Consumerism

The 17th-century poet and priest Robert Herrick entitled one of his poems ‘Who covets more, is evermore a slave’.

A more modern divine, Richard Foster, writes of our ‘insane attachment to things’. Our world seems enslaved to consumerism, so how should Christians respond?

These two books adopt very different approaches to the subject. Jeff Manion, pastor of an evangelical mega-church in Michigan, uses Bible passages from Ephesians and first-name case studies – so ubiquitous in this type of book – to encourage his readers to eschew materialism and seek contentment through what he calls ‘a thorough understanding of our spiritual adoption, redemption and sealing’. Manion’s book is biblically sound but covers much the same ground as John Piper in Desiring God (Multnomah) (the book which gave us the concept of ‘Christian hedonism’), but with less panache. Its style is folksy American but without Piper’s theological gravitas, which makes it rather inaccessible for British readers.

Mark Clavier’s book on the other hand could not be more British, despite Clavier himself being an American Episcopalian priest (who has lived in the UK since 2008). He uses a dry and iconoclastic style to vent his spleen at the modern cults of consumerism and ‘self-actualization’, and laments how the UK Church – and especially his own Church of England – now cravenly genuflects to these cults. Some of Clavier’s targets, including Fresh Expressions and Messy Church, are misjudged, but his diagnosis is spot-on, and makes his book a challenging read. JM

This book explores the ideas raised by the author’s viral YouTube video, ‘Why I Hate Religion, But Love Jesus’.

Washington-based Bethke, now 23, was brought up attending church but had a troubled childhood. He drifted away from faith until he decided to investigate Christianity afresh at college.

This heavily anecdotal book aims to win over atheists and sceptics he believes may miss out if they look at the Church or religion and not Jesus. He explores the kind of religion he sees prevalent in the US Church: religion that is often strong on appearance, doing the right thing, and with an Old Testament view of sin and punishment.

An interesting read, if a tad repetitive, this will appeal to his target audience. However, he has overlooked many wonderful examples of grace-filled churches that are transforming communities. To some extent he also underplays what we might call the ‘religious’ elements of Jesus’ own call to discipleship. AP

At the End of the Day

‘There’s absolutely nothing to be said in favour of growing older,’ said Patrick Moore. David Winter disagrees. Winter starts with Ecclesiastes 12 – ‘a beautiful but rather gloomy picture of what it means to be old’ – and argues from numerous Old and New Testament passages and characters including Methuselah, Eli and Samuel, Simeon and Anna. He explains the passages and explores what it means to grow, and be, old, revealing how scripture doesn’t focus on frailty but on how to live with purpose.

The book is well written and researched, with a generous helping of wry wit and warmth. The octogenarian author is incisive and honest as he speaks of the emotional, spiritual and physical rollercoaster of ageing.

The issues of death, resurrection and the life to come are addressed both theologically and pastorally. Valuable for those involved in pastoral ministry and for carers. DB