It’s been an upside down month so far. An eight-month old Canadian baby has been issued a health card with a 'U' for 'Unassigned' rather than M or F for Male of Female. The parent – a non-binary transgender person who identifies as neither male nor female – says it’s up to the baby to decide what gender it is when it grows up.

The parent, who has named the child Searyl, apparently wants to spare the child from the ‘restrictions’ that come by ticking a boy box or girl box.

The case raises all sorts of questions – not least about what might be the effect on the child socially, psychologically, spiritually of what is essentially a one-off social experiment.

At the same time doctors are calling for ‘trans women’ to have womb transplants on the NHS just as Hayden Cross, the first female-to-male transsexual to become pregnant, is about to give birth.

Am I alone in wondering if the world is going ever so slightly barking mad?

You might think that there are few things more self-evident than the fact that human beings are divided into two distinct types, male and female. Females have XX chromosomes, female hormones, breasts, ovaries, wombs etc. Males have XY chromosomes, male hormones, testes etc. Don’t they?

Where does this new transgender ideology come from?

Its origins can be traced to an American philosopher and exponent of ‘queer theory’, Judith Butler. Butler’s view, now becoming mainstream, is that the biological sex of individuals as man or woman is irrelevant to their gender identity. It represents what Butler calls a ‘dictatorship of nature’ from which they must be free. A person’s sexual identity is determined by what they feel they are - and is flexible, changeable and diverse, or if you like, fluid.

What Butler first taught in the ivory towers of universities and in books few people will ever read is now being shouted in the streets and is starting to influence law and social policy. 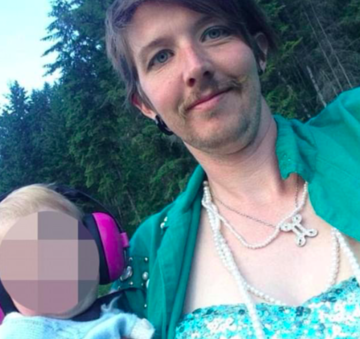 Searyl is the child of a non-binary transgender parent

Now we’re being told that gender is simply a social construct, the product of a biased society. That gender has no biological basis at all. That gender roles are being forced upon people. That it’s all simply a result of the way that people are being brought up.

When even feminist and gay icons like Germaine Greer and Peter Tatchell get called ‘transphobic bigots’ and are barred from speaking in British universities simply for expressing the view that ‘trans women’ are not real women, then the situation is getting pretty serious.

We are starting to see real pressure being put on people to adopt a new ideology, use new language, affirm the beliefs of transgender people and participate in surgical and hormonal gender reassignment. Some lobby groups want these things to be legally enforced.

The problem seems to be increasing. A family doctor in a British university town recently told me, "I’m seeing one gender conflicted teenager every day. They’re all asking to be referred to the gender reassignment clinic in London and they are all on antidepressants. What should I do?"

There’s been a huge increase in the number of children and teenagers being referred to this clinic with numbers doubling with each passing year. The same thing is happening all over the UK and elsewhere in the Western world. This new ideology seems to be quite contagious and now schools are being accused of 'sowing confusion' in children's minds by over-promoting transgender issues

How Should We Treat Gender Dysphoria?

So what actually is transgender? Is a ‘trans woman’ really a woman trapped in a man’s body? Or is ‘she’ really just a man who has an unshakeable false belief that he is a woman?

As recently as 2013 doctors called this condition ‘gender identity disorder’. Many doctors feel it should still be called that. They believe that giving sex hormones and gender reassignment surgery to transgender people is not only clinically inappropriate but an abuse of professional privilege.

But some doctors, driven more by cultural pressure than scientific evidence, have changed their minds. They think we should be offering hormones and surgery for those who feel trapped in the wrong body.

So what’s going on? Let’s start by being clear on two things.

First, there is such a thing as ‘intersex’ condition where there are abnormalities in a person’s chromosomes, hormones or external or internal genitalia. Doctors recognise dozens of these conditions and there are fairly clear guidelines about how to treat each one. But this is not transgender. In transgender people chromosomes, hormones and genitalia are either male or female.

Second, there is a real medical condition called ‘gender identity disorder’ which is now being called ‘gender dysphoria’. It’s very rare, affecting fewer that one in 10,000 people. The affected person feels deep distress over the sex that they have been born with and tries to resolve these feelings by identifying with the opposite sex.

So this is the key question. If there is a disconnection between the body and mind, then do you shape the body to fit the mind or do you shape the mind to fit the body? Do you try to help them to become reconciled with their body through counselling and psychotherapy? Or do you give them hormones and surgery so that their body conforms to their chosen gender identity?

Well, it depends on whether you think the real problem is in the body or the mind. And I, like many other doctors, am in the latter category. I think we’re being seduced and even coerced into thinking that the body, rather than the mind, is the real problem when there is actually no scientific evidence to back that up.

Everyone can see that a woman with anorexia nervosa is not fat, but she has an unshakeable belief that she is, so she is radically dieting and regularly purging herself. How do we help someone in this situation?

We certainly don’t affirm her belief that she is fat or encourage her to diet or, least of all, offer her liposuction. And yet anorexia nervosa has a lot of similarities to gender dysphoria. You have a person who is deeply dissatisfied with the body that they’ve been given and may be obsessively preoccupied and distressed by it.

A high proportion of people who suffer from gender identity disorder also suffer from other mental health conditions like depression, anxiety, substance abuse, self-harm and suicidal thoughts. In many of them these problems do not resolve with gender reassignment. In fact hormones and surgery deal only very superficially with what is often a very deep psychosocial problem that doesn’t lend itself to quick technological fixes.

So how should Christians respond to the phenomenon of transgender?

First, we need to see it through the lens of creation. The Bible is unashamedly binary. Genesis 1:27 tells us that God created man in his own image – male and female. This is perfectly consistent with what we see in nature – male and female are different - genetically, hormonally and physically. Researchers have identified 6,500 genes that are expressed differently in men and women.

Next, we must appreciate that we live in a fallen world which has affected the human race at all levels – so we should expect to find conditions like intersex and transgender. People affected by these conditions are often deeply hurting and we need to treat them with the love and respect we should show to any human being made in God’s image.

Third, we must not capitulate to transgender ideology. Loving people does not mean affirming their false beliefs, using their chosen names, admitting them to their chosen facilities, allowing them to compete as the opposite sex in sports events and offering them hormones and gender reassignment surgery. That is not love – it’s actually a form of abuse. You might get called a transphobic bigot or worse. But the Bible, science and common sense are on your side. God created us male and female. It’s really that simple.

Fourth, we must grasp the gospel opportunity transgender presents. Jesus welcomed everyone but in so doing he did not endorse all their beliefs and behaviour. Rather he called them to repentance and faith – to a life of obedience enabled by the Spirit, to be transformed by the renewal of their minds. And he called them to find their identity not in their chosen gender, or anything else, but in him.

Finally, we need to get informed better about the issue –

Click here to read our in depth article Transgenderism: Born with the Wrong Body?