Obviously it’s the centenary of the start of World War One next year, but what were your personal reasons for writing this book?

I have a very strong view that if you’re looking at conflict, as I suppose I have in various ways for the last 30 years and more, you have to report the whole of the conflict ? apart from the front line, the military, the strategy and the weaponry and the gains and losses. Warfare these days affects everyone. This was the first time, in 1914, where in every way the whole population was involved, and specifically women. And if it hadn’t been for what women did, we wouldn’t have won the war.

Was there any one woman who stood out from your research?

There are so many extraordinary women. One of the first women who came out of the war very much as a pioneer who was very significant was Elsie Ingles. [She] was one of the few women GPs at the start of the war. She famously marched into the war office in Edinburgh Castle on the day after war broke out and said, ‘Right, I can provide you with women doctors and nurses for any place you want to send them.’ And the official looked at her and said, ‘Dear lady, go home and sit still!’ She did nothing of the sort. In the end, the Scottish women’s hospitals went to 17 different theatres of war, with [more than] 1,000 women doctors and nurses, and frequently under fire.

In the book you draw on your own experiences of war; would you say you see more differences than similarities between different conflict zones?

War isn’t a sort of set state. War is human beings in extremis and it takes many forms. So you can’t lay down descriptions of what war is and what happens or whatever ? every one is different.

What effect has it had on you to witness the horror of war up close?

It’s a professional job you do. There are terrible things happening but you shouldn’t be surprised about it. Read any book about war and you will know what man does to man. Michael Buerk said that when he first went to Ethiopia and saw starving children he realised there couldn’t possibly be a God.

Do you recognise that experience yourself?

My own experience is that if there’s a God he allows terror, suffering, fear, ignorance and violence. It’s not logical to think of somebody like that.

So would you describe yourself as an atheist?

Yes. I believe hugely in the virtue of human beings ? in their ability to do good, to be kind, to achieve progress. We have been an amazingly successful species coming up from the swamp. We have to learn on a daily basis to live together, to appreciate our differences and not kill each other over it. 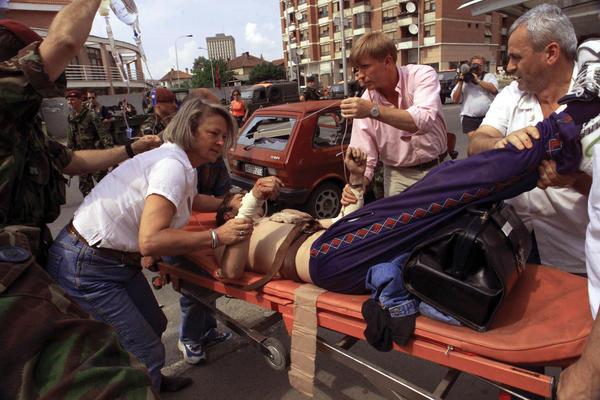 I’ve seen so many foul things happen, but among that there are always good people attempting to do something good. You have to ask yourself, ‘What can I do?’ I can’t leave it to a higher being; I think that’s laziness, moral laziness. When you look at what we call ‘the evils of the world’, they are man-made, so it’s up to us to undo them.

You had a Christian upbringing, I think...

I knocked through more denominations [as a child] than most people get in a lifetime. But it inspired in me an immense love of music from the Methodist Church. And I don’t underestimate the consolations of religion.

I see what good is done, but I also see evil done by religious outfits still today. You look at the Catholic Church and its sexual shenanigans. And then you look at the way that women are treated in some branches of Islam. It’s all to do with education ? understanding that we must treat each other better.

You mentioned the consolations of faith. Have you ever had moments when you wished that you had something or someone to pray to?

Not really, but as they say, there are not many atheists in foxholes ? which is one of the great quotes from World War One.

Everybody, when you’re in a moment of desperation, cries out. But I’ve never expected a clap of thunder and a shining light. Nope. I’ve seen too many people who were innocent killed next to me. Young people, people with a blameless life, people with no idea what was happening. Nobody intervened for them.

Fighting on the Home Front, by Kate Adie, is out now.