Learning is a serious business. Some of us study for years at university or in the workplace to equip ourselves with the tools we need for our professions. We toil over textbooks and case studies so we can struggle up a corporate career ladder.

Others, however, grow up watching The Two Ronnies and end up telling jokes in front of huge crowds because…well, because they’re not really sure what else to do.

The fact that Paul Kerensa fell into comedy because nothing else worked out is as surprising as the slightly personal piece of information about him with which we launched into our conversation.

Kerensa is incredibly funny – and talented enough to write for some of TV’s biggest comedy hits. He’s been a regular writer for Lee Mack’s Not Going Out, and was the man responsible for suggesting a then little-known comedian for a bit part in its first series. That comedian was Miranda Hart; and with her growing   fame came the chance to write on her eponymously named and multi award-winning sitcom Miranda. Today, Kerensa’s comedic star continues to rise. Most recently he’s been involved in scripting The Kennedys, a new sitcom that began on BBC1 in October. He’s also a co-writer of the new series of Chris Evans’ TFI Friday. On top of that he tours clubs, bars and churches with a popular stand-up set.

Yes, churches. Kerensa is a Christian, and a theologically trained one as well, who often performs a set for Christians who are happy to laugh at themselves. And very funny it is too. I am delighted to be able to report first-hand that the crowd at Spring Harvest this year thoroughly enjoyed themselves in his presence.

Earlier this year Kerensa and his wife Zoë wrote a Lent course called A Beautiful Friendship (Darton, Longman and Todd), based around the movie Casablanca, which also aired in audio form on Premier Christian Radio. The course grapples with the notion of how Christians should engage with popular culture. That balance between living out his faith and being a part of the secular world of showbiz seems to be the thing that fascinates Kerensa: ‘I love all that stuff,’ he told me, ‘particularly when you get Bible films like Noah and they’re always a bit rubbish. But we all have hope, we go in, going, “Yes! Our story on the big screen! Oh, they got it wrong again. Rock monsters! Too many rock monsters!”

My parents said: ‘oh no, please be an actor or a vicar or anything. Why stand-up comedy?’

So, where to start with a man who balances comedy, faith and culture? None of these seemed as interesting as the first fact I’d discovered about him…

I’m going go right back to the start. Is it true that you have no belly button?  That is true.

Are you the world’s first man, then?  Yes. I’m here to announce that I am Adam.

If that’s true, you’re looking remarkable for your age. I like to think so. There are a few of us about; apparently Alfred Hitchcock didn’t have a belly button either. In my case, it’s because when I was born I had some organs on the outside. There’s also a whole lot more medical stuff that I’m missing out.

I’ve mentioned it at enough gigs now that probably at about one gig in 80, someone stands up and says, ‘I’ve not got one either.’ And usually they’ve never met someone else without a belly button, so it’s quite a nice moment.

I feel like there should be some kind of club. Well, there is, actually. I’ve been to a couple of conventions.

That’s amazing.  I met a guy at a gig recently who said that he had two belly buttons...

Was faith something that was there at an early age among your family?  Not in a huge way. My parents would send my brother and [me] off to church. We were part of church life and village life...It was one of those hubs of the community, it was a proper sort of ‘bibliesque’ existence when you’ve got the church and everything revolves around it.

Over time, I started to engage with it myself and try and question what it’s about. I was very much a slow burner. I’d take one chunk of time to go: ‘Ok, let’s work out what the Bible narrative is. What are the stories; what are the parables of Jesus; what’s the narrative of his life; what’s prayer all about?’ It was a bit like doing an Alpha course but one session would take a year.

I did a theology degree after that, but not as a vocational thing. It was a good way of trying to intellectualise it... and learn a bit of Ancient Greek and Hebrew.

And in the comedy writing I imagine that’s hugely useful now. Absolutely. I’ve never tried to really nail the Ancient Greek sitcom market, but it’s there to be had.

And what about comedy, growing up? I imagine you were brought up on all those classic comedians of the 70s.  I loved comedy growing up, really, and as a teenager, I’d often be watching it on a TV at the corner of the house somewhere. I would be watching Fawlty Towers, Blackadder, Two Ronnies, Red Dwarf... I was a massive Red Dwarf fan.

I would be learning. I’d have the Monty Python script book, and on my journeys to school in the back of the car, I’d be learning the sketches. I was the guy who could recite an entire Monty Python monologue. I was the comedy geek, myself and three others. We formed a little comedy-writing group at school from the age of about 13; we’d send off sketches to the BBC as if we were the next Monty Python or something. We just got a letter back saying, ‘No, no, no...’

What was your first foray into professional comedy?  Nowadays you get up-and-coming comedians doing it vocationally – you can do a stand-up comedy degree course – it’s a big growth market. And so they go, ‘Right. I’ve got a career plan…’ And the rest of us who started ten or 15 years ago are going, ‘What? You can’t do it like that...for a start, that’s not the reason to do it, and secondly, we’re next in the queue. What are you talking about?’

It was more a diminishing of other career options, I think, for me; which is the way it should be for stand-up comedy. It should be a real last port of call when nothing else is calling, because I tried…I did a theology degree; my parents, who weren’t religious, particularly, were thinking, ‘Oh great, he’s going to become a vicar’, and then I said, ‘No, I should go to drama school’ and they went, ‘Oh no, he’s going to become an actor.’ And then I left drama school and realised I couldn’t act and said, ‘I’m going to try stand-up comedy’, and they were like, ‘Oh no, please be an actor or a vicar or anything. Just, why stand-up comedy?’

Most stand-up comedians will tell you how difficult it was at the start, and how they died on-stage but just kept going.  I think it takes a certain type of person to go through those early gigs of just being terrible...but you have to keep getting back on the stage and giving it a go.

You have to go through that. It’s vital, really. It’s the only way you could learn, and surely if Christianity teaches anything, it’s that death is not the end.

I remember Tim Vine saying to me, ‘My act is clean, but only because that’s the way I prefer to do it. It’s not really a faith thing.’ Do you have a position on stuff you will or won’t make jokes about as a result of your faith? I think it’s pretty similar to how Tim says it. It’s almost the reverse of that, actually...there are places you don’t go because you’re not the sort of person who would go there. Which is probably why we’re Christians in the first place.

I think that all comedians have things they won’t say on stage…comedians who are always trying to be outrageous have limits of what they won’t say. They’ll never do a clean joke...there’s a couple of comedians I know who will only do jokes on sex and drugs. And I’ve seen people walking out of those shows, not because they’re offended but just because they are bored.

I’ve never tried to nail the ancient Greek sitcom market, but it’s there to be had

You sometimes do stand-up gigs for churches. That must be dynamically different. It is. You’re always going to play the room, I suppose…if anything, the church gig gives you a bit more scope rather than limiting [you], I think, because you can actually talk a bit more freely about religion and faith. And also you’ve got a bit more space because people aren’t diving in with the fiercest of heckles, hopefully; although some church gigs can get rough.

You can’t just do the church gigs. I think you’d be numbed pretty quickly to what is actually properly funny and what’s just quite nice and light. 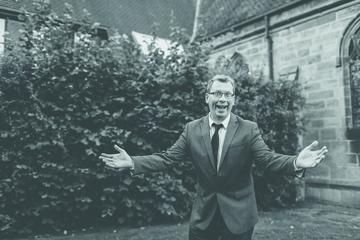 How does it work with your writing for shows like Not Going Out and Miranda? Do you sit down with Lee or Miranda in a room?  No, the only times I’ve sat down with Miranda in a room is after the series has finished and we’re out for the end of series meal. It’s all emails now, unfortunately. But for series one and two of Not Going Out, we did sit down in a room together and do it, which was great.

In fact, if I hadn’t gone through that part of the process, I would not have been asked about who shall we cast, and said ‘let’s get Miranda in’. In a way, writing remotely suits me, because I’m on the road as a stand-up and not many comedy writers are doing stand-up as well. So it means that I can be doing three or four gigs a week, up and down the country. I do most of my writing out of motorway service stations and Harvesters. So you can enjoy the salad cart and then a bit of writing.

It’s easy to forget that it’s actually hard work; writing jokes is difficult and takes a long time. Often that’s the trick with stand-up; it’s a con in a way, isn’t it? It’s about convincing people that ‘Oh, this is all off the top of my head’, when actually it’s several years’ worth of material…I’ve got a couple of stories that started off with just one little line and then over two, three, five years I have built on that, and so now it’s a five, ten-minute piece.

It is great, of course, to be responding in the moment too, like Eddie Izzard and Ross Noble do. I think Ross is one of the few who does it properly...That whole idea of taking what the audience are throwing at him and just coming up with it uniquely for that night. But most of the rest of us, we’re cheating.