Only 5 per cent of UK population love the Bible. We need to get serious about evangelism

Once upon a time I fell deep in affection with Carl Gustav Jung.

It turned out to be a dreadful mistake. It took me up a very attractive blind alley with only a nicely camouflaged black hole at the very end.

My reasons for befriending Jung were good ones. It was the mid 1980s and the great enemy of faith was Freud. Reductionist, atheist and pseudo-scientific psychologist, as Freud was, Jung was a great antidote to aggressive anti-religious scientism.

But, Jung was a trap. He used the language of God and spirituality but he was really peddling an idolatry of the self. His work was the fusion of the intuitive, the psychic and the occult, reconfigured in an organisational schema that mimicked science.

One of the reasons he was attractive was the psychological maps he drew combined with the categories he created which allowed his audience to feel they had a real handle on reality through the pretence of the adoption of scientific language.

There is no doubt that many of Jung’s categories ‘work’ to give us a topographical map of the psyche that brings order and some level of insight. But every time you test them, rigorously, they fail to convince. And the real danger with him is the anti-Christian Gnosticism that his whole world is predicated on.

It seems the Bible Society has discovered Jung. They have adopted part of his schema of individuation, the ‘persona’ and cut and pasted it rather lamely onto a survey they have taken: 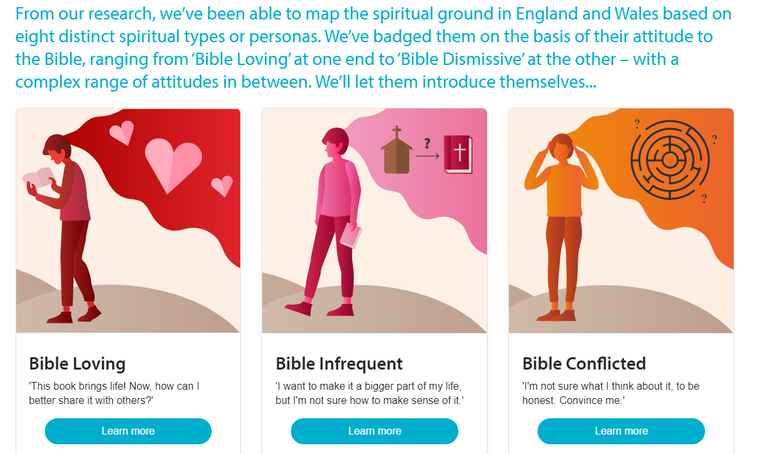 The 'Lumino' survey fails to impress on two grounds. Instead of mis-using Jungian typology they could just as easily have placed personalities in categories rather than personas (but it doesn’t sound quite so authoritative); and like all surveys, everything depends on what kind of questions you ask and what people take them to mean.

The great flaw of surveys is that by a careful juxtaposition of question and the massaging of language you can get them to present almost any conclusion you like.

Rather charmingly, this study in personas has 40% of the UK claiming to be ‘Christian’ with only 18% having any sense that the Bible might be something they turn to and recognise as being useful or significant! So it may be there is something a little less than robust about how they chose to present the category Christian, or if people self-identified, it may be that all it tells us is that the word has a wide variety of different meanings to different people, some of which conflict with each other.

The survey succeeds in giving a snapshot of the rapidly changing proportion of religious allegiance in our society between practicing Christians, sub-Christians, post-Christians and atheists.

My reading of Bible Society's research is slowly but surely the number who know Jesus and follow him has diminished to 5%. Slowly but surely the group who seriously dislike Christianity and the Church, the Dawkinites and the Pullmanites, have grown to 49% of the population, greatly outnumbering the 38% of vague theists (including committed Christians) who think there is or might be a God.

The sliding scale of belief between the 5% of believers and the 49% of atheists have been given the equivalent of psychological profiles to make it easier to evangelise them.

This may be nothing more than the difference between an exercise which wants to see the glass has half full (the Bible Society) and critics (me) who think it is half empty. I take the darker view because I observe a stark and rapid melting down of faith, and the culture that it was associated, giving way inexorably before a movement of secular antagonism to faith, (not unlike that which characterised Marxism 1.0), with no evidence of it slowing down, let alone being reversed.

The Bible Society has set out to re-motivate its followers and has used this rather sub-scientific faux-Jungian approach to suggest that there are lots of people who range from under-informed about the faith to ignorant of it, rather than just antagonistic as an increasing number are. And that these diminishing group who are more vacuous than hostile are willing to say so in a survey. No doubt it is good news of a sort that they are not closed off to knowing more about it.

But this is not really a very profound discovery. We knew it already. However the Bible Society have spent a bit of money and used some fresh technology to tart it up a bit. They have given it a lick of psychological paint and re-packaged it in a format heavy with breathy and knowing consultants adept at suggesting they know much more than they do, in order to cheer along their followers into a more intrepid evangelism.

I’m very much in favour of all and every kind of evangelism. But decades of watching evangelistic fads and enterprises come and go, (the Church growth movement was one of them for a couple of glorious decades) has left me wary of systems and fashions.

On top of that I think things are too serious in the West to worry over much about psychological profiling to spur us into praying, acting and sharing our faith with any neighbours we have. We are rapidly losing freedom of speech at the hands of an aggressive secular culture. And once by 2050, we find 50% of the UK population practising Islam, we may find that the opportunities for evangelism, are as long gone in the UK as they have been in Syria and Turkey.

If the Bible Society’s profiling of personas has encouraged anyone to be a little more courageous in standing up for and representing Jesus in the public space and private friendship, all well and good. But in those places where the Gospel is growing fast, notable China, Russia and parts of Africa, they seem to be managing quite well without it.

Gavin Ashenden has worked as a Vicar, University Chaplain and lecturer, BBC broadcaster, author and newspaper columnist. He writes a regular column for the Jersey Evening Post and lives between Shropshire and Normandy. He blogs at ashenden.org