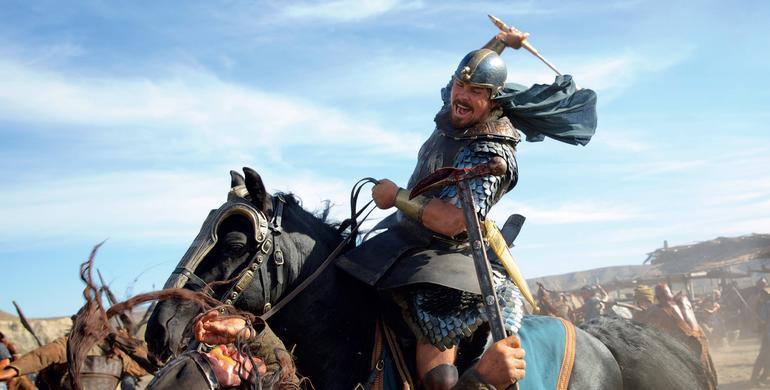 Scott’s epic retelling of the Exodus story is far more faithful than Aronofsky’s idiosyncratic version of Noah and the flood. There are no stone creatures in Exodus, just plenty of eyeliner and slightly camp snake-handling (not in a Mark 16 sort of way) along with lashings of sword and spear play, skies full of arrows and chariot racing aplenty. In short, this is a pretty faithful retelling of the Exodus story. Even Christians who are easily offended when asked to use their imaginations have nothing to fear.

The story begins with Moses, who is one of Pharaoh’s generals and is living in his palace, but is blissfully unaware of his Hebrew birth. The story of him being placed in a basket and found by Pharaoh’s daughter is told later when Moses’ origins are explained to him. Until this time, only Miriam and the woman Moses calls ‘mother’ know the truth.

Scott’s Exodus has some points of comparison with Gladiator, which he also directed. Both tell stories of an ageing ruler who has greater trust in an adopted heir than in his own son. In both films the son bears a grudge against the usurper, causing him to go underground before exacting his revenge in the final reel. It is to Scott’s credit that he manages to keep faith in the biblical account while reusing an old plot.

There is some poetic license in Exodus: Moses’ religious awareness seems to get ‘turned on’ after a blow to the head, and God appears to him as a young boy. But when it comes to plagues, a recalcitrant Pharaoh and the rest of the plot, this is a fairly straightforward rehearsal of the Exodus story.

The onscreen reality of the final plague – the death of every firstborn son – offers a challenging view of how God hands out judgement. It could be argued that the Egyptian overlords get their just desserts having mistreated the Hebrew slaves for 400 years (which Scott also depicts in all its brutality). But when the firstborn son in every Egyptian family stops breathing, it is hard not to question the proportionate nature of this action. Moses himself challenges God on this, but gets short shrift. It might well be the case that people who find faith in God difficult will question whether there might have been another way to set his people free.

Exodus is not only true to the biblical account; it also gives credence to the idea that understanding God’s actions and following where he leads is not like following a divine guidebook. This was shown to best effect when the Red Sea wasn’t parted in conventional Hollywood style. Instead, the people had to wade in first, not knowing how deep it was but believing that God would somehow lead them across.

Exodus was released in UK cinemas on 26th December