I grew up in a family that believed in God but never really made a commitment to him.

We didn’t go to church or read the Bible, until my brother saw Jimmy Swaggart preaching on TV. The whole family started watching and we all accepted Christ in front of the television and we started going to church.

I fell away and got more interested in performing. But we rededicated our lives when I was 20 and we became Stryper. We became very serious about our commitment to God and changed the lyrics and started tossing out Bibles to the crowds. We took it very seriously.

When you make a stand for God – you are going to receive persecution and it’s going to be a tough journey. You add to that our style of music and the way we looked [in the 80s] – the hair up to the moon and the yellow and black craziness - it was an open door to being loved and hated at the same time. And it’s still that way. We get a lot of grief from both sides. At the same time it doesn’t stop us from doing what we know we’re called to do.

It feels like Stryper isn’t a part of any club. Nor have we felt welcomed in any club. When we played the Dove Awards [a Christian music event] no one wanted anything to do with us. No one talked to us. We could sense that we weren’t very welcome.

We have Satanists who listen to us. We have Atheists – I see it on our Facebook page all the time “I’m a Satanist and Stryper is my favourite band” - it’s pretty incredible.

I write about things I’ve personally gone through. There’s a lot on the new album pertaining to the internet and how people judge one another on the internet without even knowing them.

We’re getting a little flak for the new album title God Damn Evil - which is to be expected [Walmart and some Christian retailers have refused to stock the album]. We actually had the title a few years back but didn’t go with it because we didn’t feel it was the right time.

Christians don’t know what to do with us

We decided to use it in 2018 because we feel like we’re seeing evil at a new level. For example the Las Vegas shooting. Who in a million years would have guessed they’d see something so horrific and evil? It feels like there’s higher levels of evil in our world today. This album addresses that: “God damn evil / God damn it all / God save the people / But God damn the walls.” It’s a prayer request asking God to condemn the evil.

Music is the common denominator and the one thing that brings us all together. Music makes us feel alive, emotional and passionate. And it affects every single human being. So what better way to inspire and encourage people? This album is inspirational and it’s going to make you smile and make you feel stronger. It’s hopeful and we’re excited about it. 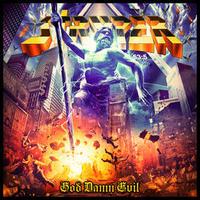