Let There Be Light? This Christian film is nothing but cheap propaganda

The last time I saw Kevin Sorbo (aka ‘the Actor Formerly Known As Hercules’) in a Christian film, he was being mown down by a car at the end of God’s Not Dead. The character he played in that film is almost identical to the one he plays in Let There Be Light: both are loud, brash atheist academics with rock star delusions. Sorbo directed this film, which is baffling. It’s one thing for an actor to be typecast by the movie industry. But to inflict the typecasting on yourself?

The similarities between Let There Be Light and God’s Not Dead don’t end there. In both films, our atheist villain went off God after losing a close family member (in this case, it’s his youngest son who died of cancer). God’s Not Dead ended with a social media campaign to make a hashtag go viral; the climax of Let There Be Light involves Christians buying a smartphone app en masse. The fact that both films have so many similarities speaks volumes about the lack of originality in Christian films. Does the audience for these films simply not mind having the same characters and plots recycled again and again?

Let There Be Light is very much a family affair. Kevin’s wife Sam stars as his ex-wife Katy, and also co-wrote the script. Their two sons Braeden and Shane are in it, playing… their two sons. The plot follows Sol Harkens, “the world’s greatest atheist” who is busy promoting his book Aborting God when he has a car crash. He survives – but for a few minutes in the ambulance he’s clinically dead. During that time, he has an out-of-body experience in which he sees his dead son, who leaves him with four words: “Let there be light”. Sol then becomes a Christian and is reconciled with his estranged family.

Sadly, like so many of the films in this genre, Let There Be Light relies far too much on easy stereotyping and barely disguised propaganda to press its target audience’s buttons. Every character who isn’t a Christian or a white American is a cliché: the Russian trophy girlfriend, the plummy English agent who calls everyone “darling” (and refers to the aforementioned girlfriend as “the commie”), the sassy African-American publicist, the Italian ex-con turned pastor who tells us how Jesus “got whacked” then rose from the dead “bada-bing”, and the Pakistani tech company owner who left her abusive Muslim husband and fled Pakistan to escape an honour killing.

If ISIS didn’t exist, the Sorbos would have had to invent it for this film. Right from the opening credits, the ‘Muslims = terrorists’ message is thrown in your face. The film opens with a montage of news reports of terrorist attacks from 9/11 to Charlie Hebdo over some Christian rap track. The whole ‘all Muslims are terrorists’ thing is disingenuous at best. As I write this review, the top news headline is about the so-called ‘New IRA’ and the funeral of Lyra McKee. But let’s just keep telling ourselves that all the terrorists in the world are Muslims. Even in America, you don’t have to look too far to find non-Muslim terrorists. It’s not ISIS setting fire to black churches in the South, is it?

The clichéd characters and weak storytelling are bad enough. But for me, the most disturbing thing about this whole exercise is the involvement of Fox News personality Sean Hannity. He’s the film’s executive producer, and the last 20 minutes of the film are just a glorified advert for the Fox News channel.

The film does have some good moments; the role reversal scene where Sol goes to pick Katy up for a date and their eldest son gives him the “make sure she’s back home at 10 o clock sharp” talk was amusing. Dionne Warwick singing was another nice moment. But for the most part, the film is just one shameless plug – for Chick-Fil-A, for Fox News and for the Let There Be Light app, which you can actually get from Apple’s App Store! 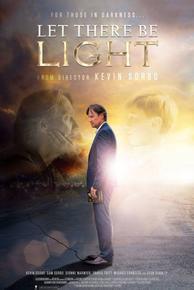 Christianity doesn’t need any more propaganda movies that caricature people and are full of cheap emotional point-scoring. If we’re going to complain about Christians being stereotyped in secular media, we need to remember that two wrongs don’t make a right. One day, Christians will make a film with strong, compelling storytelling that promotes the Christian faith without taking cheap shots at non-Christians or pushing a Jesus-is-a-Republican political agenda. Until then, we’ll keep having stuff like Let There Be Light thrust upon us.

George Luke is a writer, radio producer and DJ

Let There Be Light is now showing in selected UK cinemas