February 2nd, 2014. Manhattan police are called to the apartment of Oscar-winning actor and director Philip Seymour Hoffman. They find him there dead, the victim of a suspected heroin overdose. He was 46 years old.

January 22nd, 2008. In the same borough of the same city, paramedics are unable to revive actor Heath Ledger, discovered unconscious by his housekeeper. The autopsy report reveals that the Australian star of Brokeback Mountain and The Dark Knight died because he combined – and heavily abused – a number of prescription drugs. He was just 28.

The pattern repeats – tragically – over and again. Glee actor Cory Monteith, dead at 31 from a heroin and alcohol overdose; Amy Winehouse, the mercurial British singer-songwriter, killed by alcohol poisoning aged 27. Men and women seemingly with the world at their feet, caught by the gravitational pull of addiction and ultimately destroyed by it. Their stories are not unique; they aren’t the first of their kind, and they certainly won’t be the last. So why are those so blessed with talent, fame and success so regularly ensnared by such vices – even to the extent that it costs them their lives?

Hoffman was widely regarded as one of the most gifted and ambitious actors of his generation. An accomplished theatre performer, he worked his way up through a series of small but significant film roles to
become one of Hollywood’s go-to leading actors. His films, including the faith-probing Doubt and Scientology-critiquing The Master were consistent critical successes, and won him legions of admirers among serious movie fans. In 2005, he deservedly won the Academy Award for Best Actor for his eponymous role in Capote. He was, for many film fans, one of the very best.

Yet despite soaring to the top in Hollywood, despite having the luxury of being able to choose which roles he wanted to play and having plenty written for him, Hoffman had a well-documented dark side. As a student at New York University, Hoffman had struggled with alcohol and heroin abuse, entering rehab at the age of 22. While managing to stay sober for the large part of his career, he relapsed in 2012. His long-term relationship with the mother of his three children broke down a year later. Less than a year after that, the dark side that he had suppressed for so long had taken over.

The stories of Ledger and Winehouse show a similar startling contrast: everything to live for, yet teetering on the brink of death; considered exceptional by everyone around them, yet unable even to navigate daily life without an extreme
crutch. Looking in from the outside, these paradoxes are confusing; shocking, even. We put ourselves in their place and ask: ‘Why on earth do they need drugs when they have everything?’

The fact that celebrity rehab clinics even exist suggest that this is a huge problem. For many, fame seems to be an unsustainable lifestyle, whether it’s due to the fact that creative people seem to tend towards extreme behaviours, or because of the immense temptations available to the rich and famous. Weighed down by the immense pressure of pleasing critical or popular opinion, celebrities often seem to need an outlet, and drink and drugs appear to provide compelling options. To us, the world of the famous seems to equate to a charmed existence: high pay for creative, rewarding jobs; big houses, fast cars and beautiful partners. Yet behind the glitz and the glamour, something clearly isn’t right. When events such as Hoffman’s death occur, a secret window opens which reveals not only that our heroes are fallible, but that they’re often deeply unhappy.

Actor Jim Carrey gave a succinct and powerful explanation of this when he told an interviewer: ‘I think everybody should get rich and famous and do everything they ever dreamed of so they can see that it’s not the answer.’ It seems that Hoffman is the latest in a line of people who discovered that fame, fortune and success aren’t all they’re cracked up to be; that – as author Jack Higgins once wrote – ‘when you get to the top, there’s nothing there’.

In the hours following Ledger’s death, fans began to gather outside his apartment building. Some brought flowers; others, hand-written notes. Between them they constructed a kind of shrine to the actor, but they didn’t just pay their respects and leave. They stayed; the crowd grew to several hundred; a candlelit vigil for their idol.

The same scenes were repeated six years later. Broadway lights were dimmed as a mark of respect for Hoffman, as crowds gathered at the home of the theatre company where he had worked as an actor and director. In their moment of shared grief and despair, those who had held him as a hero reached for symbolism and ritual.

Social media provides a fascinating barometer for public feeling. After Hoffman died, Twitter users largely expressed their shock and horror at the news. For a while, the actor’s name was among the most discussed on social media, as fans struggled to come to terms with what had happened. They eulogised; they expressed profound feelings of grief. These were not the theatre folk of Manhattan, who might have seen Hoffman in the flesh, but painter/decorators from Chelmsford; schoolteachers from Hull. Which begs the question: just why did they feel so strongly?

WHY ARE THOSE SO BLESSED WITH TALENT, FAME AND SUCCESS SO REGULARLY ENSNARED BY SUCH VICES?

In his book Gods Behaving Badly (SCM), theologian and sociologist Pete Ward offers an explanation for why we feel such a close affinity to certain famous people. ‘Celebrities offer a myriad of different “takes” on what is possible in consumer culture,’ he writes, ‘representing different ways to be a woman, to be black, to be old, to be faithful, to be gay, to be a parent, to be unfaithful, to be a loser, to fail. In fact, they mediate a range of possible ways of being human. Our interest in celebrities, or indeed our lack of interest in them, is rooted in the extent to which we relate to what they represent.’

In Hoffman’s case, fans marvelled at his acting, but also his ability to succeed as an unconventional figure in the superficial world of Hollywood. In Ledger, fans perceived not only a gifted and good-looking actor, but a young man who in one sense showed remarkable maturity, consistently giving performances way beyond his years. Even Winehouse personified the kind of tumultuous life struggle that many young people can identify with. So when these figures fall – in the most final way possible – the tremors of sadness aren’t just about the loss of a favourite performer, but the failure of a role model.

When Bolton Wanderers footballer Fabrice Muamba collapsed during a televised FA Cup match, the most common theme on social media for the following hour was a rallying call to ‘pray for Muamba’. When Cory Monteith died, the recurring cry from fans was to ‘pray for Lea’ (actress Lea Michele, his long-term partner). When their heroes fall, people often respond by deferring to the sacred. Suddenly, they seem to believe on some level that prayer works, even if they hadn’t previously lived their lives as if it did. Vigils, candles, prayers pinned to shrines; celebrity tragedy so often provokes a spiritual response.

There’s common ground here; a connection between our story and our culture’s. When the famous die, many people build a shrine reminiscent of the Athenian altar ‘to an unknown God’ (Acts 17:23). I want to suggest that our role as Christians isn’t to heavy-handedly correct that inscription, but to comfort and understand those who mourn. We can build on their natural urge to seek spiritual reflection in a time of grief; join them in praying for families left behind; stand with them in their vigils, whether candle-lit or virtual. 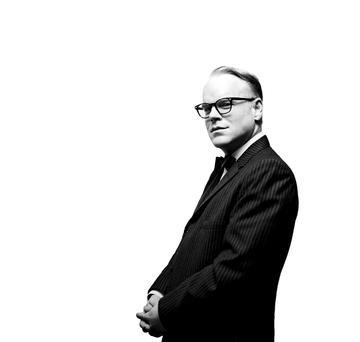 Those Twitter users weren’t unanimous in their feelings about Hoffman. Users of the social network are notoriously brutal, and alongside the outpourings of grief were criticisms of Hoffman’s drug use, questions of why this story got top news billing above far more worthy tragedies, and then, in increasing waves, attempts by people to place themselves in the story. ‘My world is less bright today’, wrote one; ‘Met PSH in 2007, he was so kind’, claimed another. While it’s easy to criticise these apparently self-centred messages, they help us to understand our culture’s need for a sense of connection. We love our heroes, and we love the idea that somehow we were part of their lives in the way that they were part of ours. In fact, since Twitter itself has seen the dawn of direct communication between celebrities and fans, we’ve moved to an era where we desire a personal relationship with our heroes, rather than being satisfied as part of their broad church of followers.

One application of this might be to suggest that celebrity deaths present a fantastic gospel opportunity. Using those quotes from Carrey and Higgins, preachers can hold up the likes of Hoffman as examples of the failures of the fame and fortune dream; and point to the only role model who won’t let you down. While that sentiment might be correct, place it for a moment in the ears of the fans we’ve described. These are people who are experiencing a genuine sense of grief – the hero with which they’ve developed a keen sense of connection is no more. Do they now want to hear a religious message about the sin and failure of this person whom they loved?

Instead of misappropriating celebrity death as a gospel opportunity, I believe we should use it to demonstrate that we understand and relate, not to our culture, but to human beings. Instead of condemning Hoffman, we should find ways to celebrate him – we should feel anger at the culture which enabled his demise, and we should appropriately critique drug culture. After the actor’s funeral, the Daily Mail was heavily criticised for publishing candid photos of mourners – including his children. Their mistake was to overlook the sense of shared experience that distressed fans are hoping for, and voyeuristically exploit the story instead. As we talk about fallen heroes, let’s not make the same mistake. The death of a beloved hero is a chance for us to show compassion, wisdom and understanding. When we’ve done that, and only then, we can move on to talk about the failings of the fame dream. We must not be seduced ourselves by the glitter and unreality of celebrity; however, our job is not simply to point out those shortcomings, but also to suffer with those who feel genuine grief when they’re revealed.

Hoffman is a huge loss to the acting world. Here’s why:

Twister (1996) – His movie-stealing cameo as a hyperactive stormchaser.

Capote (2005) – He won Best Actor for his portrayal of writer Truman Capote.

Doubt (2008) – He played a good priest undone by the accusations of a suspicious Meryl Streep.

The Master (2012) – Another Oscar nomination followed Hoffman’s role as a cult leader.